(FOX 9) - So far the month of November has been quiet in Minnesota, but that doesn't mean it has been calm.

While precipitation has been sparse so far, the winds and wide temperatures swings have been the story. But, that's quite common for November. There's a reason the winds are often referred to as the "November gales". That doesn't mean we can't get some large storms crossing the country, but not this year and certainly not this week.

While there are exceptions to every rule, for the most part, much of the Lower 48 states will experience a very quiet few days ahead which should get many of us through the long Thanksgiving weekend without any weather-related complications. Now, the Pacific Northwest will see bouts of precipitation and parts of the Plains and the East Coast will get some brief moisture, but that's just about all that's expected through the weekend.

Our peaceful stretch of weather is because of one glaring reason: a strong area of high pressure on the southern end of Greenland in the north Atlantic. That can be seen in the image below by the giant red blob off the East Coast showing far above average heights in the atmosphere. This is a BIG sign of above average temperatures thanks to a blocking ridge and associated area of high pressure. 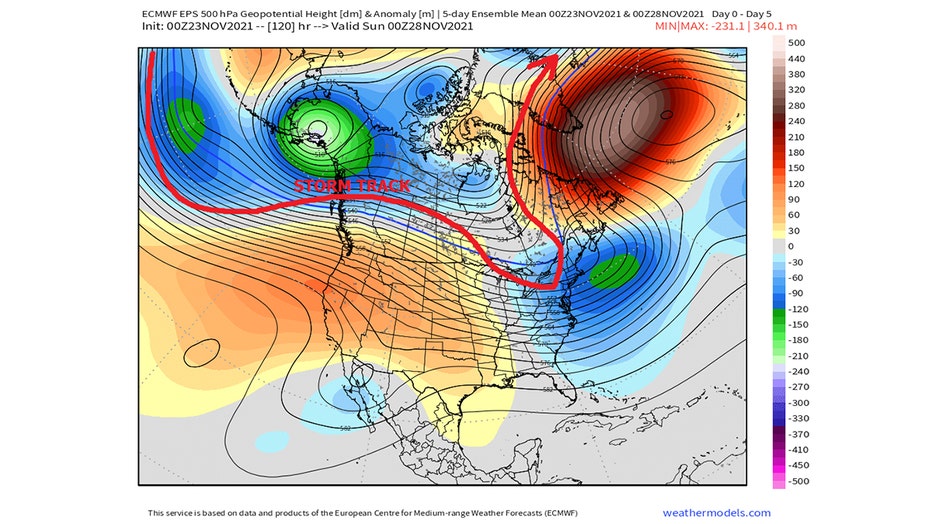 Meanwhile, the yin to that yang has been hovering over Alaska for the last 10 or more days. Feet of snow and temperatures sitting 20 or 30 degrees below average for almost half the month could lead many areas of the largest state to one of the coldest Novembers in the last 100 years.

While this type of pattern over North America can lead to some cold temperatures flowing into the U.S. from time to time, it rarely brings active weather because the storm track is often centered too far north. Storms will roll into British Colombia or the far Pacific Northwest, push into the central Canadian Prairies and then dive into the East before surging back northward to head toward Greenland. While this can bring some storms into the east, they are often too far away from the Gulf of Mexico to pick up any meaningful moisture once they've unloaded it along the West Coast. This means many of these clipper type storms will bring plenty of wind and cooler temperatures, but very little rain or snow.

This type of pattern may hang around this week, but it won't last forever. However, when this pattern changes remain to be seen, especially since it could be well over a week away. When we glance at the possible pattern roughly two weeks from now, you can see some big changes to much of North America. The trough that has been sitting over Alaska fans out and spreads southeastward, leading to at least a slight troughing over North America. This would push the storm track much farther south and would lead to a much busier pattern nationwide. 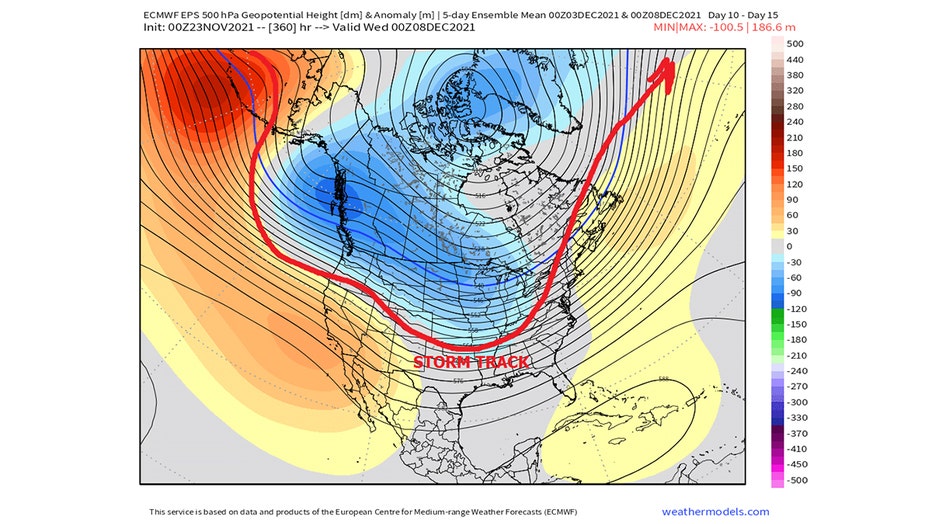 Now, this image shows the possible overall pattern roughly two weeks from now, so it needs to be taken with a certain grain of salt. But, it can give us an idea of what could be in store for us in the weeks ahead.