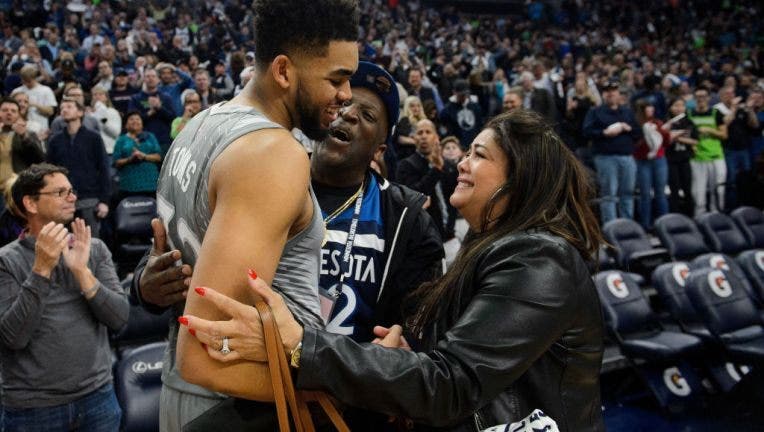 Karl-Anthony Towns #32 of the Minnesota Timberwolves hugs his parents, Karl and Jackie Towns after winning the game against the Denver Nuggets of the game on April 11, 2018 at the Target Center in Minneapolis. (Hannah Foslien / Getty Images)

Since losing his mother in April, Towns says he's lost six more close family members to COVID-19, including his uncle who just passed away just this week.

"I've lost a lot," said Towns. "Close family members, people who have raised me, who have gotten me here, yesterday being another moment where I have to look back at my life with that person and try to get through that."

Towns says his focus in recent months has been doing what he can to keep his family safe.

"Trying to keep my sister, the kids, my dad out of harm's way," said Towns. "I've seen a lot of coffins in the last seven months, eight months. But I have a lot of people in my family, in my mom's family, who have gotten COVID and I'm the one looking for answers still, trying to keep them healthy."

The pandemic hit Towns and his family hard early on, with his mother Jacqueline Cruz Towns losing her battle with the disease in April. Towns remembered his mother as one of his biggest supporters and made it all the way to the NBA.

But, when asked if returning to the court this month could be a form of therapy, Towns rejected the notion that basketball will be able to help heal the loss he has suffered.

"Basketball as therapy to me, that's news to me," explained Towns. "I haven't, I've never been in a mentally good place since that moment I went into the hospital. It's just getting harder and harder every day... I wouldn't say it's therapy for me at all. I played this game more because I just love watching my family members see me play a game that I was very successful and good at. It always brought a smile for me when I saw my mom at the baseline or in the stands having a good time."

While playing basketball might not provide relief, Towns says he is thankful for the support he is getting from the team and his teammates, particularly D'Angelo Russell, who he says had been by his side through this incredibly difficult time.