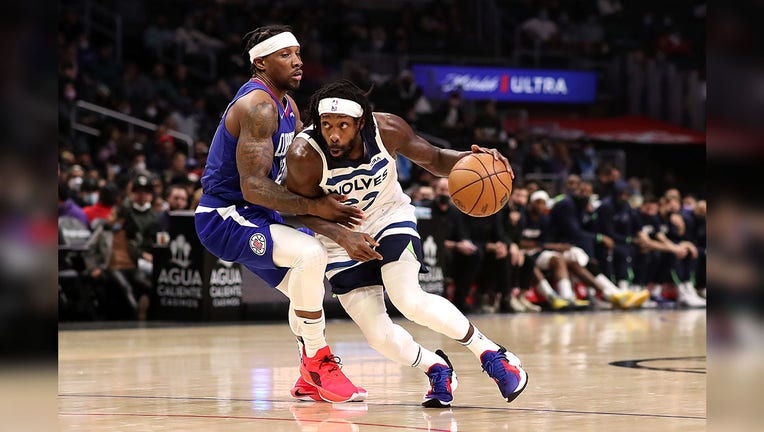 Patrick Beverley #22 of the Minnesota Timberwolves drives to the basket against Eric Bledsoe #12 of the Los Angeles Clippers during the third quarter at Crypto.com Arena on January 03, 2022 in Los Angeles, California. (Photo by Katelyn Mulcahy/Getty

(FOX 9) - In what might have been the final game without two-thirds of its "big three" lineup due to COVID-19 health and safety protocols, the Minnesota Timberwolves snapped a three-game losing streak with a 122-104 win over the L.A. Clippers Monday night.

Edwards scored a game-high 28 points as six Timberwolves scored in double figures. Taurean Prince and Jaden McDaniels combined for 35 points off the bench, on 14-of-20 shooting and 6-of-9 from the perimeter.

The Wolves snapped a six-game losing streak against the Clippers, and had lost five of its last six entering Monday night.

The Timberwolves led 26-21 after one and 64-46 at the half, forcing the Clippers into double-digit turnovers and getting 13 first-half points from McDaniels. The Wolves also shot 57.4 percent from the field in the first half.

The Wolves led by at least 15 points the entire second half, and had an 85-65 lead entering the fourth quarter.

Serge Ibaka scored 17 points to lead the Clippers, and Justice Winslow added 15. But the Clippers committed 20 turnovers and shot just 34 percent from the perimeter.

The Wolves improved to 17-20 with the win, and are in ninth in the Western Conference with four games to play before the reaching the halfway point of the season. The Clippers dropped to seventh in the West at 19-19.

Towns and Russell are expected back soon as they both work to regaining conditioning from being out. As they continue to regain full strength, the Wolves will try to reclaim the rhythm it once had with it.