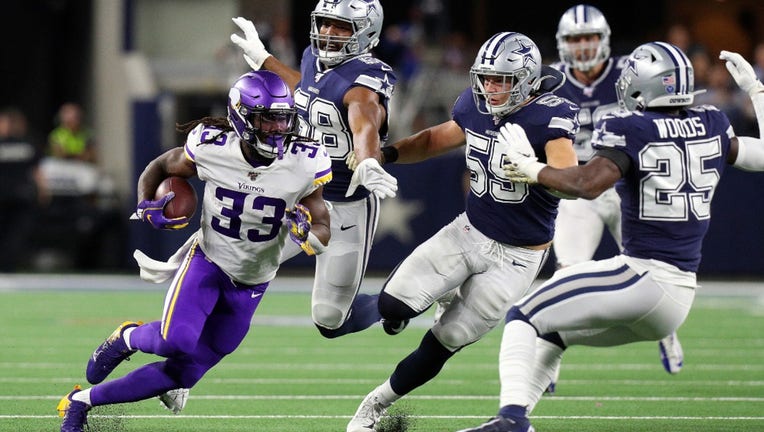 Dalvin Cook #33 of the Minnesota Vikings runs against the Dallas Cowboys including Leighton Vander Esch #55 and Xavier Woods #25 at AT&T Stadium on November 10, 2019 in Arlington, Texas. ((Photo by Richard Rodriguez/Getty Images))

MINNEAPOLIS - The Minnesota Vikings are back from their bye week, though they don’t begin preparations for the Seattle Seahawks until Wednesday.

The Vikings got some help Sunday night in the NFC North from the San Francisco 49ers, who beat the Green Bay Packers 37-8. The Vikings and Packers are now tied atop the division at 8-3, though the Packers have the head-to-head tiebreaker with their Week 2 win over the Vikings at Lambeau Field. That, and a 3-0 record on the division, compared to Minnesota’s 1-2 mark.

The good news for the Vikings is that they finish with three out of their final five games at U.S. Bank Stadium. That home schedule consist of all division games, starting with the Lions on Dec. 8, followed by the Packers on Dec. 23 for Monday Night Football and finishing with the Bears on Dec. 29.

First and foremost, the Vikings head to Seattle to face the Seahawks and MVP candidate Russell Wilson next Monday night. The Seahawks are 9-2 and currently in the NFC Wild Card mix, trailing the 49ers by one game after their win over the Packers Sunday night.

The reality is this: The NFC North Division will come down to the Vikings and Packers, and their Dec. 23 meeting will play a major factor in that race. The Vikings also have their work cut out for them. They’re in rough shape if they expect to get any help with Packers’ losses.

To keep it simple, the Vikings must win all three of their remaining home games, and at worst get a split between road games against the Seahawks and Rams. That gives them a 12-4 finish, with a win over the Packers. If Vikings fans want help from the Packers in the loss column, the only real possibility of the five games left is this Sunday at the Giants. Of Green Bay’s final five games, only the Vikings have an above .500 record.

After a 2-2 start, Kirk Cousins apologizing to Adam Thielen and Stefon Diggs no-showing for practice, the NFC Playoffs were not in the thought process. That’s the beauty of the NFL, anything can happen any given Sunday.