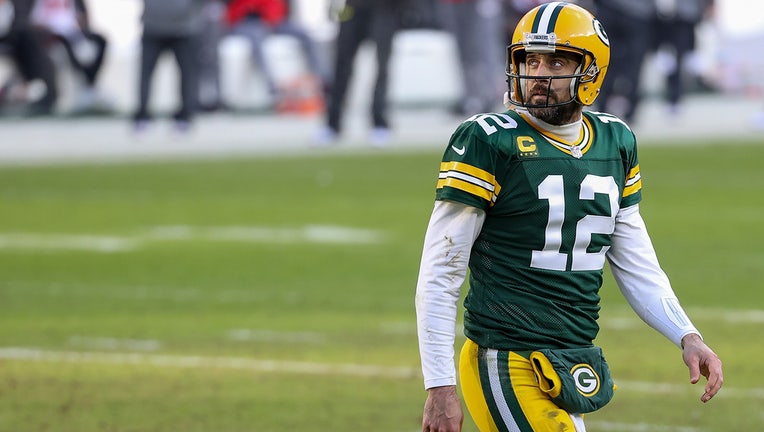 GREEN BAY, WISCONSIN - JANUARY 24: Aaron Rodgers #12 of the Green Bay Packers walks across the field in the second quarter against the Tampa Bay Buccaneers during the NFC Championship game at Lambeau Field on January 24, 2021 in Green Bay, Wisconsin.

MINNEAPOLIS - Aaron Rodgers made one of his few public appearances of the NFL off-season on Tuesday as speculation looms about his future with the Green Bay Packers.

Rodgers was on "The Match" golf event, paired with PGA Tour pro Bryson DeChambeau. They played a match for charity against Phil Mickelson and Tom Brady. Rodgers and DeChambeau came away with the 3&2 win over Mickelson and Brady, but the TNT crew asked Rodgers directly about his future with the Packers as they played.

Asked if Rodgers will be sporting the Packers’ No. 12 jersey when they face the Chicago Bears, he answered with a vague, "Yeah I don’t know, we’ll see. We’ll see, won’t we?"

Rodgers had the same answer when asked if he’ll be in uniform for the Packers for Week 1 against the New Orleans Saints. Given an opportunity to ease the fears of Packers fans, Rodgers did the exact opposite with his answers.

Reporters emerged hours before the start of the NFL Draft back in April that Rodgers was not happy with certain members of the team’s front office, fueling fire that he would be traded before the start of the 2021 season. He had previously been linked to the San Francisco 49ers and Denver Broncos as possible landing spots if he didn’t stay in Green Bay. The Broncos added fuel to that fire, drafting a defensive back in the first round when they were in position to grab a potential franchise quarterback.

It all started two years ago, when the Packers used a first round pick on quarterback Jordan Love. This year, they took a defensive back.

Rodgers did not show for Green Bay’s organized team activities earlier this off-season, and he wasn’t at mandatory minicamp. Training camp is just around the corner, so we’ll know a lot more then.

Amid an offseason of drama and speculation, Rodgers and the golf crew had fun with it.

"I’m just out here having a good time with Tom. I’m trying to talk to him about if he’s going to keep playing or not," Rodgers told the TNT crew.

Charles Barkley joked that Rodgers could tell him what the future holds, and he wouldn’t put it anywhere on social media.

"Charles I’ll tell you this week in Tahoe. You can leak it," Rodgers said.

With just a few weeks before training camp, the Packers and their fan base want answers about their quarterback. Right now, Rodgers isn’t giving any.