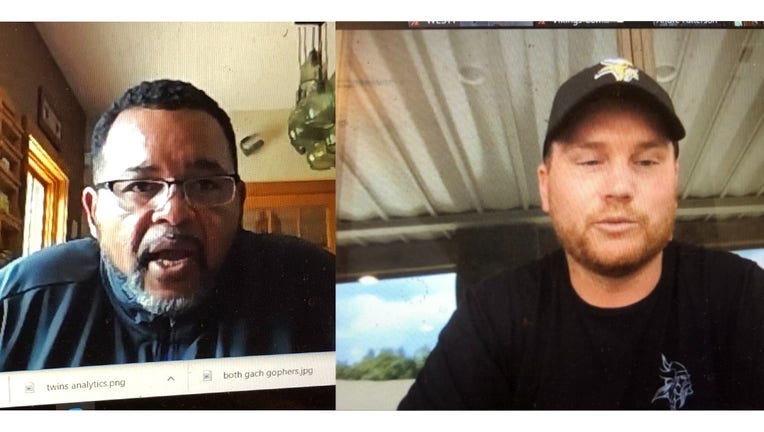 MINNEAPOLIS - The Minnesota Vikings put the finishing touches this week on an unprecedented virtual off-season program, with players and coaches confined to their homes for the last three months due to the Coronavirus pandemic.

The last 12 weeks have consisted of a virtual NFL Draft, team meetings via video conferencing and teaching via computer and a strong Internet signal, instead of a whistle and a football field. Due to Covid-19 concerns, we don’t know when training camp will be, but the Vikings are ready to gather as a team and be outside at TCO Performance Center.

Andre Patterson and Adam Zimmer talked Thursday about working together as the Minnesota Vikings co-defensive coordinators and their shared vision for the defense in 2020.

“I just want to get my hands on them,” Vikings Co-defensive coordinator Andre Patterson said Thursday via Zoom.

Patterson and Adam Zimmer have a new challenge this season: They need to co-exist as the top coaches of the defense. Since that decision was made in the off-season, it’s been their mission to make it work, and work together. They’re equally replacing George Edwards, whose contract was not renewed after the 2019 season.

In addition to running the defense together, Patterson will continue to work with the defensive line, and Adam Zimmer will work with linebackers and the secondary.

“We’ve got one common goal, we’re all working on the same page. It’s not about who gets to do this or who doesn’t get to do that, it’s about us working together to make sure that we can achieve our common goals,” Patterson said.

“I think just working together is the key. We’ve done a good job of communicating since Day 1. We laid out everybody’s responsibilities throughout the coaching staff so everybody is on the same page to know what they need to do,” Adam Zimmer said. “All we’re trying to do is get one common goal, and that’s to be the best defense that we can be and the best defense in the NFL. However we have to divvy that up is what we’re going to do.”

So who will call the plays?

“That’s up to the boss. We just do the job that he wants us to do and that’s our responsibility. We just do our job,” Patterson said.

Their task is to move forward with a defense that will feature several new players, with at least seven departures in the off-season. Everson Griffen, Linval Joseph, Stephen Weatherly, Xavier Rhodes, Trae Waynes, Mackensie Alexander and Andrew Sendejo all gone.

The goal for 2020 is to forge ahead, and new names will have to emerge to help the veterans.

“You’re never going to have it be the exact same every year. You’re going to have to rely on some new players and young guys, that’s why you’ve got to coach them up and bring them together as best you can,” Adam Zimmer said.

“I think the biggest thing about the NFL, it’s about developing talent. That’s what you’ve got to do, you can’t keep everybody forever. Even though you would love to as a coach, you’ve got to be willing to bring in talent and you’ve got to have confidence that you can develop that talent,” Patterson said.

With team gatherings strictly virtual this off-season, Patterson and Zimmer have changed their approach with defensive installs. One the plays and schemes are put in, they put the pressure on the players in a group setting to tell them what’s going on in each play.

Adam Zimmer has used the quarantine to spend time with his dad, and his boss, at their Kentucky ranch. Outside of football, they bond over hitting golf balls and watching deer. Every so often, football comes back into play during down times.

“Once in a while we’ll sit on the back porch looking for deer and we get a football idea. He gets the notebook out or we get the whiteboard out, it’s been really good, I’ve enjoyed my time with him,” Adam said.

Both acknowledged the virtual off-season has gone as smoothly as possible. They’ve had virtually no technological glitches, other than getting started.

“The biggest thing for me was having my son here to hook all this stuff up. I had to have somebody with me because I’m not good with all this,” Patterson said.

“Other than getting my dad set up for draft meetings. He would always text about three or four times a week, come up here my thing is not working. I had to be part-time IT guy,” Adam said.

They’re both looking forward to seeing how what’s transpired in virtual meetings translates when they can actually put it to life in a football field.

“I know that the guys mentally know what to do, now it’s about having the chance to get them to execute the technique that they need to do for us to be successful,” Patterson said.

“You can spit it verbatim from the book all you want, but can you go out there and execute it when everything is going live and fast? To see them actually go through what we’ve taught them over the last 5-6 weeks is what I’m most excited about,” Adam said. “See who can handle it, see who can’t, see who’s going to rise to the top, and who isn’t. And just getting back on the practice field. I want to get out and work with them and see what we’ve got.”

It’s a safe bet everybody wants football back on the field and not in a Zoom meeting.