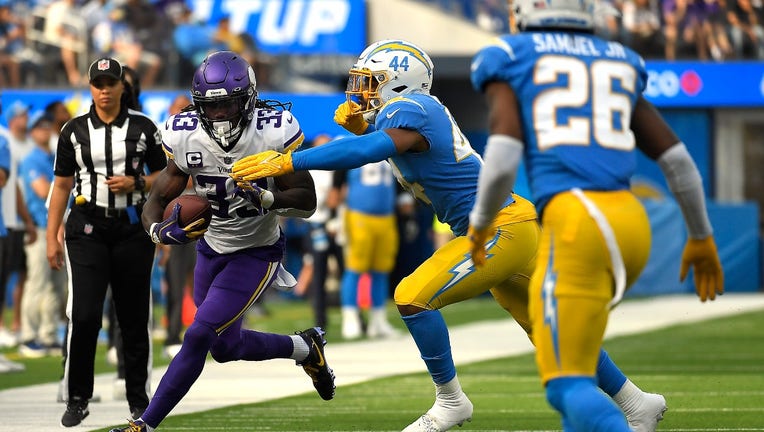 Dalvin Cook #33 of the Minnesota Vikings carries the ball as Kyzir White #44 of the Los Angeles Chargers attempts a tackle in the game at SoFi Stadium on November 14, 2021 in Inglewood, California.  ((Photo by Kevork Djansezian/Getty Images))

MINNEAPOLIS - It’s Packer Week, and there’s not a lot more you need to say if you’re a player, coach or fan affiliated with the Minnesota Vikings.

A 27-20 win at the Chargers last week got the Vikings’ season back on track. They snapped a two-game skid, improved to 4-5 and are now just a half game behind the Carolina Panthers for the final spot in the NFC Playoffs. Last week, it felt like the season was at a crossroads with key players injured, others on the COVID-19 list and Dalvin Cook facing a lawsuit away from the field.

Sunday’s win has the team rejuvenated, and ready to push forward. But the reality is the Vikings haven’t actually accomplished anything yet, and Aaron Rodgers is coming to town. If they don't beat the Packers, they're right back to the season being on the line.

"It would be big. We’re trying to catch up to where we hope to be. There is still a lot of time left, we’ve just got to keep grinding one week at a time," Vikings coach Mike Zimmer said. "Like I told the guys, if you’re satisfied with what we did last week, you haven’t don’t diddly squat today."

The last time the Vikings played the Packers, Dalvin Cook had 33 total touches for 226 yards and four touchdowns in a 28-22 Minnesota victory. It was the first of three straight wins, and five out of six.

Cook is also coming off 24 carries for 94 yards and a touchdown in last week’s win over the Chargers.

We’re nine games into the season, and the Vikings have already had their share of ups and downs. Eight of their name games have finished within one possession. Three games have gone to overtime, two that ended in losses.

They’ve won a game on a walk-off field goal, lost a game on a missed field goal and last week, got aggressive on offense to end the game in victory formation, with the ball and not giving the Chargers a last chance. The season has been hard to watch at times, but with eight games to play, the Vikings still have plenty to fight for as they chase a playoff spot.

"There’s just a lot of football left. I hate saying it again and again, but it’s going to be the case probably until the last couple weeks of the season. As long as there’s football games left, what’s up ahead is what tells that story far more than what’s behind," quarterback Kirk Cousins said.

Adam Thielen, who had five catches for 65 yards in the Chargers’ win, said that game became a rallying point for the Vikings. They knew it was a game they had to have for the second half of the season to have any significance.

"For how frustrated we are, for how disappointed in where we are, we’re right there. It is what it is, let’s go to work and let’s find a way to get it turned around," Thielen said. "The important thing is we can’t change our mindset. It’s attack mode, we’ve got to go."

Zimmer joked on Wednesday that it’s never fun playing Rodgers at least twice a year. He makes of habit of stressing defenses, and giving opposing coaches headaches. A game against the Packers is never over until the clock hits zero, and Zimmer and company would prefer No. 12 be standing on the sideline.

This year, despite a tense offseason with the Packers, Rodgers is completing 66 percent of his passes for 1,720 yards, 17 touchdowns and just two interceptions. Most importantly, the Packers are 8-2 and lead the NFC North. As long as No. 12 is the Packers’ quarterback, you can’t relax.

"Every time I play him I feel that way. You never want him to have the ball at the end of the game, I don’t think any coach in the league would say ‘Oh, let’s give him the ball.’ You’re fighting, scratching the entire game," Zimmer said.

The Vikings have eight games left, five within the NFC North. The other three are at the 49ers (4-5), against the Steelers (5-3-1) and against the L.A. Rams (7-3). There’s still time, but the margin for error gets thinner every week.