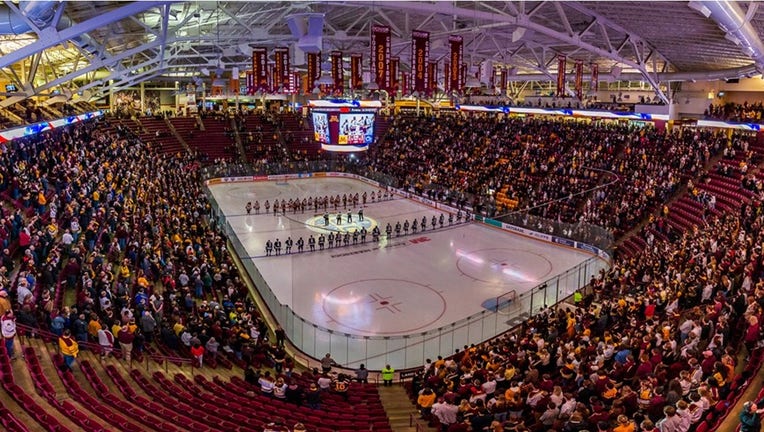 MINNEAPOLIS - The University of Minnesota men’s hockey team plays a home-and-home series this weekend against Minnesota State University-Mankato, and you can watch Saturday’s game on Fox 9 Plus!

The Gophers are off to a 2-0 start after an opening sweep of Lindenwood, with 4-0 and 6-4 wins last weekend at 3M at Mariucci Arena. Bob Motzko’s squad now faces one of their biggest in-state rivals, and a Mavericks’ squad that ended their 2021-22 season last year at the NCAA Frozen Four.

The Gophers are the preseason favorites to win the Big Ten, and are No. 2 in the country in the early U.S. College Hockey Online poll. The Mavericks are No. 5. The Gophers will host Mankato Friday night, then the series heads south on Highway 169 for Saturday night’s tilt in Mankato, set for 6 p.m.

Before the season started, Gophers’ Brock Faber, Jackson LaCombe, Matthew Knies and Logan Cooley were all named to the Preseason All-Big Ten team.

Late last week, Bob Motzko and his family announced they were creating the "Mack’s 18 Scholarship" program at the University of Minnesota, named in honor of Mack Motzko, who was killed in a car crash in the summer of 2021 in the west Twin Cities metro.

A $1,000 scholarship will be given away at every Gophers’ home game throughout the 2022-23 season. When Mack played hockey, he wore the No. 18 jersey.

"This fall would have been Mack's freshman year in college and Shelly and I wanted to carry on the legacy of our son and his caring for others," Bob Motzko said. "Mack had a passion for college hockey and we felt that paying it forward to students who support college hockey, and specifically Gopher Hockey, was a tremendous way to keep Mack's spirit alive."