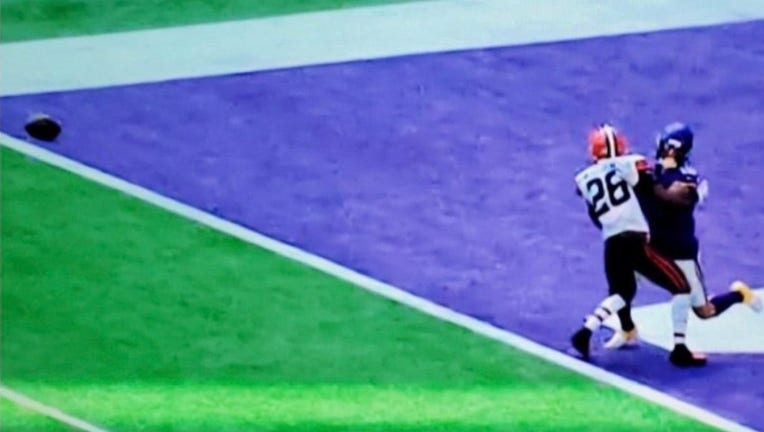 Vikings receiver Adam Thielen tries to catch a Hail Mary from Kirk Cousins in Minnesota's 14-7 loss to the Cleveland Browns, but appears to be interfered with by Greedy Williams.

MINNEAPOLIS - The Minnesota Vikings are 1-3 after a 14-7 loss to the Cleveland Browns on Sunday, but it’s not without some controversy.

The Vikings’ offense failed to score the rest of the game after Kirk Cousins hit Justin Jefferson for a touchdown on the game’s opening drive. With just a few seconds left, Cousins rolled out to his left and tried to hit Adam Thielen in the end zone. The Vikings needed a touchdown and extra point to force overtime.

A look at the Vikings' last chance Sunday against the Browns.

Greedy Williams, who intercepted a Cousins’ deep pass intended for Thielen earlier in the fourth quarter, clearly grabs and is holding Thielen in the end zone well before the ball gets there. The officials did not throw a flag, and the game was over. Had a flag been thrown for pass interference in the end zone, the Vikings would’ve gotten an untimed down at the 2-yard line.

Sunday night on Vikings Postgame Tonight, Jim Rich and Vikings Radio Network analyst Pete Bercich break down the play. Watch the video for yourself. The play had former Gophers’ great and current NBC analyst Tony Dungy questioning the NFL on social media for why a penalty wasn’t called.

If Thielen makes the catch, the Vikings can send the game to overtime with an extra point, or go for a two-point conversion and walk-off win.

Just as frustrating, Eric Kendricks was penalized for a questionable defensive hold with under two minutes to play in the first half after the Vikings had made a fourth down stop. The Browns’ drive extended, and Kareem Hunt scored three plays later.

Games never come down to officiating, but it can be argued the Vikings should’ve had one more chance.