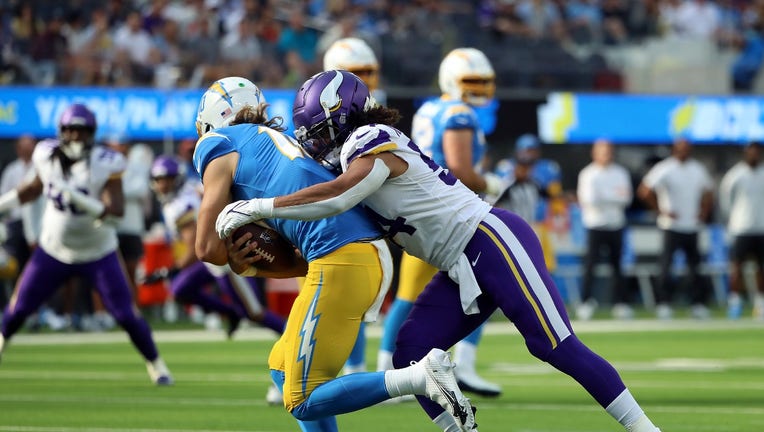 MINNEAPOLIS - The Minnesota Vikings are in Detroit Sunday to face the Lions in a pivotal game for their push to the NFC Playoffs.

The Vikings can improve to 3-0 in the NFC North Division with a victory, and get back to .500 at 6-6 for the third time this season. The Vikings started 1-3, then beat the Lions and Panthers. The Vikings then fell to 3-5 after losses to the Cowboys and Ravens, before getting back to 5-5 with wins at the L.A. Chargers and over the Green Bay Packers.

The Vikings and Lions are both wearing "Oxford Strong" shirts during pregame warm-ups at Ford Field to honor the victims of a school shooting at Oxford High School, which is about 45 minutes away from downtown Detroit.

The Lions are winless at 0-10-1, but Minnesota won’t be taking them lightly. The Vikings allowed Detroit to score a go-head touchdown and two-point conversation late in regulation in Week 5, forcing Kirk Cousins to drive the offense down the field in range for a Greg Joseph game-winning field goal.

With six regular season games to play, the Vikings are on the fringe of a spot in the NFC Playoffs. They’re also hurting on the injury front. Running back Dalvin Cook will not play due to a shoulder injury, meaning Alexander Mattison will get the start. Rookie Kene Nwangwu, who has two kick returns for touchdowns this season, could be the No. 2 running back behind Mattison. Cook was also out for the Week 5 win, and Mattison had 153 total yards and a touchdown in that game.

The Lions lost their first eight games by an average margin of nearly 13 points, but their last two have been by just 2.5 points.

The Vikings are without rookie Christian Darrisaw, who is out with an ankle injury suffered at San Francisco. On defense, they’re without top tackler Eric Kendricks due to a biceps injury, and Anthony Barr is out after being listed as questionable with knee and hamstring injuries. Barr has dealt with a lingering knee issue all season, and suffered a hamstring injury at the 49ers last week. With Kendricks and Barr out, Nick Vigil starts at middle linebacker and calls the defensive plays. Mackensie Alexander, who had been listed as questionable, is active.

The Vikings are also likely without Patrick Peterson, who is on the reserve/COVID-19 list despite being fully-vaccinated.

The Vikings are getting back Michael Pierce and Dalvin Tomlinson to the defensive line. Pierce was activated from injured reserve after missing seven games with an elbow injury. Tomlinson was activated from the reserve/COVID-19 list. Danielle Hunter is out for the season, and Everson Griffen is away from the team addressing concerns for his mental health. Griffen posted on social media earlier this week and that he’s bipolar.