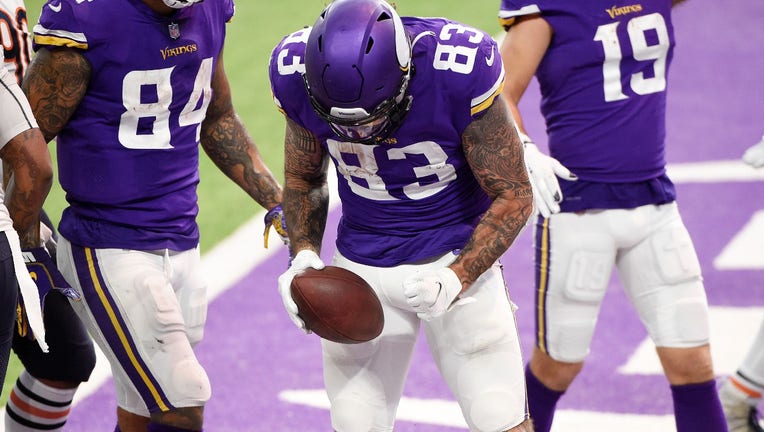 Tyler Conklin #83 of the Minnesota Vikings celebrates after scoring a touchdown during the fourth quarter against the Chicago Bears at U.S. Bank Stadium on December 20, 2020 in Minneapolis, Minnesota. ((Photo by Stephen Maturen/Getty Images))

MINNEAPOLIS - He didn’t get the complete celebration with a victory, but tight end Tyler Conklin felt like he got a monkey off his back in Sunday’s Minnesota Vikings’ loss to the Chicago Bears at U.S. Bank Stadium.

Conklin got his first career touchdown on a 20-yard pass from Kirk Cousins. At the time, it got the Vikings within 30-27 with 8:05 to play in regulation. The Vikings ultimately lost to the Bears 30-27, and while they’re not mathematically eliminated from the NFC Playoffs, their chances went down to four percent with two games to play.

"It definitely would’ve been a lot better if we could’ve came away with the win yesterday. It’s my third year and I felt like it was kind of starting to haunt me a little bit that I haven’t gotten in the end zone yet," Conklin said Monday. "Finally made that happen yesterday, it felt great. Kind of like a weight was lifted off my shoulders."

Conklin finished the day with three catches for 57 yards, including a 30-yard reception earlier in the game. He’s seen an increased role in Minnesota’s offense in the last four games, with fellow tight ends Irv Smith Jr. and Kyle Rudolph each battling injuries.

Rudolph missed his second straight game Sunday with a toe injury, after previously making 93 straight starts. Two weeks ago, Conklin caught all five of his targets for 40 yards in the Vikings’ 26-14 loss at Tampa Bay.

Conklin made 13 catches on 17 targets combined his first two seasons. He’s got 12 catches on 14 targets this year, including his first touchdown, with two games remaining.

Quarterback Kirk Cousins said after the loss he could see Conklin’s production coming.

"There have been several plays throughout the year where he was open in the end zone and someone else got the touchdown time and again. He deserved a touchdown by now, and it was great for him to get it the way he did," Cousins said. "It was a really strong play by him, it showed the player he is and the player he can be going forward."

The Vikings had a chance to control their NFC Playoff destiny with a win over the Bears on Sunday. Instead, Chicago piled up nearly 400 total yards and David Montgomery ran for 146 yards and two touchdowns.

Minnesota’s defense clearly struggled without Eric Kendricks for the third straight game. Kendricks is the team’s top tackler and defensive play-caller. Add him to the list of an injury-riddled season for the Vikings, who have played much or all of the season without Anthony Barr, Danielle Hunter and Michael Pierce. The Vikings’ secondary has been inconsistent without Cameron Dantzler and Mike Hughes for stretches, and cut Holton Hill. Troy Dye is the latest to go down with an injury Sunday.

"It’s been a tough year with the injuries, just trying to have guys ready throughout the week leading up to situations in case things happen. That’s just been something we’ve been trying to do pretty much all season," Harris said.

There’s nowhere to hide for the Vikings in the final two games. They now have to win out at the Saints and Lions, have the Cardinals lose out and the Bears lose one of their final two games to make the NFC Playoffs.

If the Vikings lose at New Orleans, their playoff chances are over. They get the national stage to themselves, the only NFL game being played on Christmas Day.