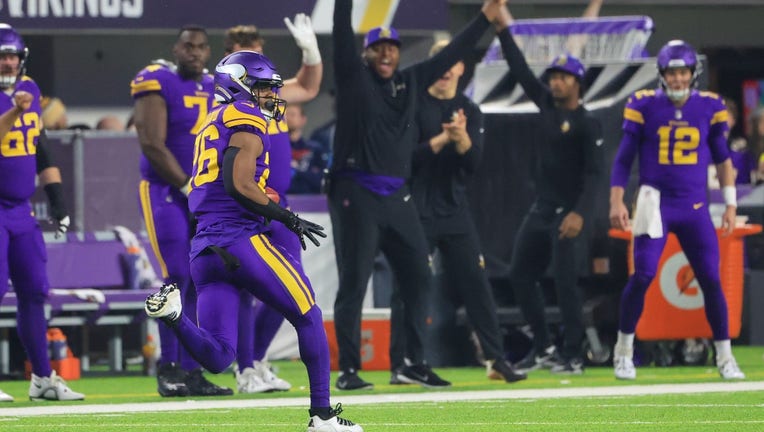 MINNEAPOLIS - Minnesota Vikings running back and specialist Kene Nwangwu was named the NFC Special Teams Player of the Week on Wednesday.

Nwangwu had a game-changing 97-yard kick return for a touchdown in the third quarter of the Vikings’ 33-26 win over the New England Patriots on Thanksgiving. The Patriots had just taken a 23-16 lead on a Mac Jones touchdown pass to Hunter Henry. Nwangwu’s kick return tied the game 23-23. The Vikings would score 10 fourth quarter points to beat the Patriots, 33-26, and improve to 9-2 on the season.

It’s the third kick return for a touchdown in Nwangwu’s career, and he joins Cordarrelle Patterson and Devin Duvernay as players to score on kick returns this season. Nwangwu’s three scores since entering the NFL in 2021 lead the league.

In 41 career kick returns, Nwangwu is averaging 13.7 yards per return.

It’s the second time Nwangwu has won the award, and he’s the third special teams player for the Vikings to win it this season. Greg Joseph won it after five field goals against the New Orleans Saints in London, and Ryan Wright won it after a 73-yard punt.

The Vikings can clinch the NFC North Division title, their first since 2017, with a win over the New York Jets on Sunday at U.S. Bank Stadium, and a Detroit Lions loss to the Jacksonville Jaguars.