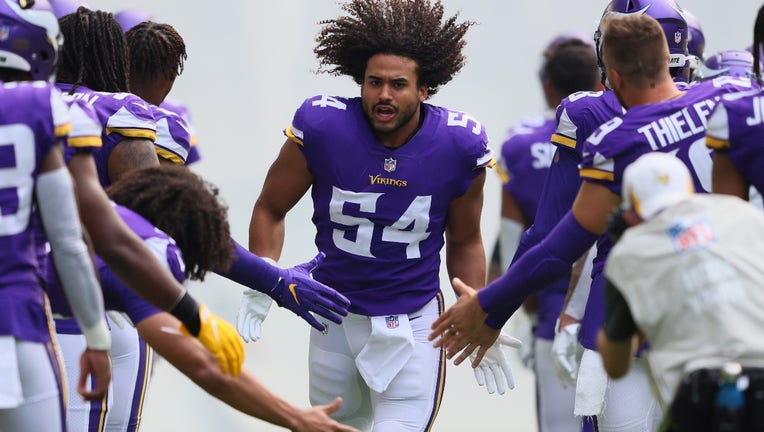 Eric Kendricks #54 of the Minnesota Vikings runs onto the field before the against the Cleveland Browns at U.S. Bank Stadium on October 03, 2021 in Minneapolis, Minnesota.  ((Photo by Adam Bettcher/Getty Images))

MINNEAPOLIS - The Minnesota Vikings beat the Chicago Bears to end the 2021 season 8-9. The next day, Mike Zimmer was fired after eight seasons as head coach. The Vikings had missed the NFC Playoffs two straight years, and three out of four years.

In the aftermath of Zimmer’s dismissal, Eric Kendricks was outspoken in he didn’t think a "fear-based" organization was the way to go. Kendricks spoke for the first time since those comments on Wednesday, when asked how the energy is different at TCO Performance Center with a new coaching staff and front office in place.

The Minnesota Vikings continue building for 2022, and head coach Kevin O’Connell is embracing a new reality every time he steps on the practice fields at TCO Performance Center in Eagan.

"I’m not going to talk about last season. It’s a new year, it’s a new day. What I can tell you is here we are. We’re here with a new staff and new players and new defense, and we have this amazing opportunity ahead of us," Kendricks said. "It’s an even playing field now, whatever happened last year is in the past. We have to move forward."

Kendricks is one of the unquestioned leaders of the Vikings’ defense, which now features a few new faces in Za’Darius Smith, Harrison Phillips and a fellow linebacker in Jordan Hicks. He’s a veteran in Minnesota, but is learning just like all of his teammates as they install a new 3-4 defense.

Kendricks led the Vikings last year with 143 tackles and had five sacks in 15 starts. He’s excited about his new coaching staff, and the respect is mutual.

"From Day 1, I've been so impressed by Eric and just his impact on our team, his impact as a leader," Vikings coach Kevin O’Connell said. "We've got guys at every level of our defense that I feel really good about, but when you've got that guy in the middle of your defense, a core player, core leader on your team, it's just absolutely huge when you're teaching the new system, but also where you can go with it really quickly."

Kendricks is equally dedicated to work in the community. He’s a leader on the Vikings’ social justice committee, and has been active in efforts in the Twin Cities to improve communication between police officers and minorities after George Floyd’s death in May of 2020.

Kendricks was the team’s nominee that year for the Walter Payton Man of the Year Award. He’s had support from the top of the organization since he arrived in Minnesota, which includes owners Mark and Zygi Wilf.

"They’re very involved in the community, so just having that bridge of communication with them and management as well, it’s not really common. I talked with players around the league and they don’t really have that communication with ownership," Kendricks said. "It’s on us now, it can’t just be on them. If I want change, then I’ve got to be that change myself."

Kendricks’ biggest adjustment in 2022 will likely be not having Anthony Barr by his side. The two were teammates at UCLA, and were Vikings’ teammates the last seven seasons.

Barr is a free agent, and has yet to find a new team.

The Vikings have a new staff and a new energy as they go through organized team activities at TCO Performance Center. But none of it means anything if they don’t perform starting Week 1, and nobody is more aware of that than Kendricks.