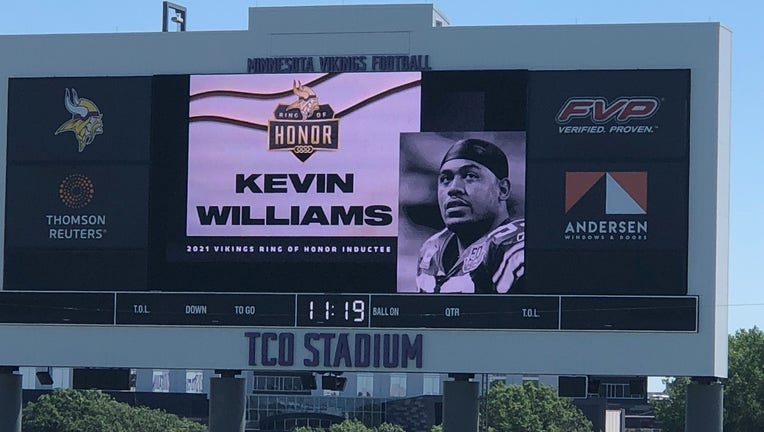 The Minnesota Vikings on Wednesday announced they're naming former defensive tackle Kevin Williams to the team's Ring of Honor during the 2021 season.

MINNEAPOLIS - The Minnesota Vikings are hosting the Cleveland Browns on Sunday, looking for their second straight win. The Vikings are also adding to their Ring of Honor during Sunday’s game.

Former defensive tackle Kevin Williams will be inducted to the Vikings Ring of Honor during a halftime ceremony. It’s a part of Legends Weekend, and as many as 100 former players and coaches will be in attendance for the event.

The Vikings took Williams with the No. 9 overall pick in 2003, and he earned All-Rookie honors. He also set the franchise rookie record with three sacks in one game, at Arizona. He started every game over 11 seasons with Minnesota, 177 starts in total, which includes the playoffs. He also played in 2014 with the Seattle Seahawks, and 2015 with the New Orleans Saints.

Williams was a six-time Pro Bowl selection with the Vikings, and was named First Team All-Pro five times. In 11 seasons with the Vikings, Williams collected 60 sacks, 13 fumble recoveries and 104 of his 113 tackles for loss.