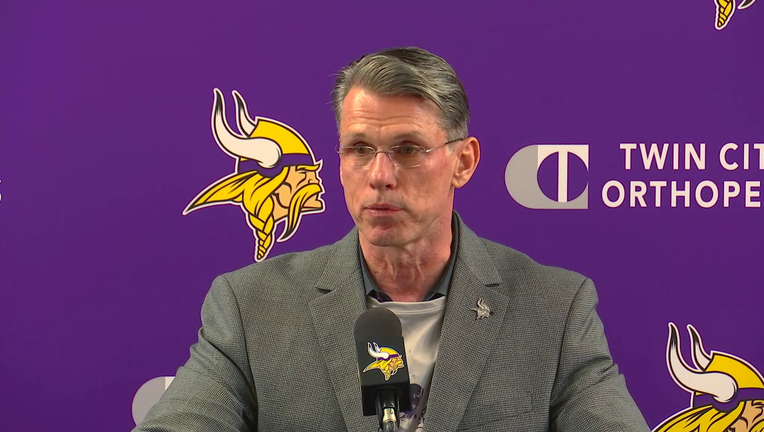 The two have been tied together since Zimmer was hired in 2014. Spielman spent 16 seasons with Minnesota, starting as the vice president of player personnel and moving to GM in 2012. Here’s a look at some of the top moments, and some of the lows during Spielman’s time with the Vikings.

The 2015 NFL Draft was by far Spielman’s best with the Vikings. He found Eric Kendricks, Danielle Hunter and Stefon Diggs that year. Kendricks and Hunter are defensive leaders for the Vikings, and leaders in the community in the team’s Social Justice Committee. Diggs emerged as a star receiver, and will always be remembered for the "Minneapolis Miracle." The three have combined for five Pro Bowls and a pair of All-Pro selections.

Spielman and the Vikings took a chance on Cook in the 2017 NFL Draft, moving up in the second round to grab the Florida State star. Despite some off the field concerns, Cook is a star in the NFL when healthy. He finished second in the NFL in rushing in 2020, has earned three-straight Pro Bowl honors and has three straight 1,000-yard rushing seasons.

Spielman took a gamble before the 2020 NFL Draft, trading a frustrated Diggs to the Buffalo Bills for multiple draft picks. One of those was a first-round pick, which went to Justin Jefferson. In 2020, he set rookie franchise records for receptions and yards, eclipsing Randy Moss for both. He made 108 catches for 1,616 yards and had 10 touchdowns this season. In two seasons, he has 196 catches and 3,016 yards. He’s a star.

The jury is still out on Kirk Cousins with the Vikings, but it can be debated if that’s a fault of Cousins or not. Spielman signed Cousins to a three-year, $84 million fully-guaranteed deal in 2018. He’s due to make $45 million next season. Cousins has thrown for at least 4,200 yards in three of his four seasons in Minnesota. He’s got 124 touchdowns and 36 interceptions in 63 games with the Vikings. But Minnesota has made the playoffs just once with Cousins at quarterback, and the Vikings have one playoff win. He puts up numbers, but tends to struggle in primetime and in the biggest moments.

Adrian Peterson played just one game in the 2014 season, and the front office’s indecision on his playing status earned public criticism. Peterson was facing child abuse charges in Texas, accused of striking his son multiple times with a switch. The team had no plans to sit their star until criticism grew so harsh that team sponsors were backing out of deals, and they were left with no choice but to put him on the reserve list. He was eventually suspended the rest of the season.

Teddy Bridgewater was set for a breakout year at starting quarterback in 2016 before suffering a career-altering leg injury in practice. Spielman and the Vikings had to do something, so they chose to send two draft picks to the Philadelphia Eagles for Sam Bradford. He went 7-78 as a starter in 2016, then lasted just two games into 2017 battling his own knee issues.

With Danielle Hunter out due to a neck injury, Spielman traded for Yannick Ngakoue. He lasted six games in Minnesota before being traded again. Garrett Bradbury just finished his third season with the Vikings, and the 2019 first round pick was benched after coming back from COVID-19. Spielman had four third round picks in the 2021 NFL Draft, and none of them made a significant impact. With Cousins out at Green Bay, Sean Mannion got the nod over Kellen Mond. Mond threw three passes the entire season. Wyatt Davis never got a chance despite multiple offensive linemen either dealing with injuries or COVID-19. There was also using a first round pick on Laquon Treadwell in 2016. He played 53 games in four seasons, making 65 catches for 701 yards and just two touchdowns.

The Vikings won just three playoff games with Spielman in charge of the front office. It was time for a change.