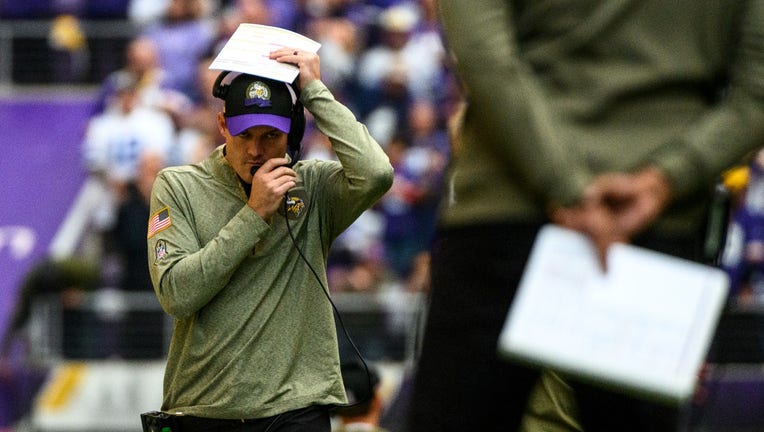 Head coach Kevin O'Connell of the Minnesota Vikings puts on a headset before the game against the Dallas Cowboys at U.S. Bank Stadium on November 20, 2022 in Minneapolis, Minnesota.  ((Photo by Stephen Maturen/Getty Images))

MINNEAPOLIS - The Minnesota Vikings sent their fan base into a mild panic on Sunday, delivering the franchise’s second-worst home loss in history in a 40-3 defeat to the Dallas Cowboys at U.S. Bank Stadium.

A seven-game win streak came to an end. There was an inevitable letdown after an emotional win at Buffalo. Just when the Vikings started to prove to the NFL and the national audience they’re for real, they played their worst game of the season. Is it the start of a troubling trend? Or is it one blemish, move on and shake it off with seven games to play?

Vikings quarterback Kirk Cousins spoke with reporters on Tuesday ahead of Thursday night's game against the New England Patriots at U.S. Bank Stadium.

"As soon as I seen :00, it was out of my head. That’s how quick that went out the window," running back Dalvin Cook said Tuesday from TCO Performance Center. "When you just know you don’t live up to your potential, play to your potential and do the things you need to do, that’s the outcome you get."

The luxury the Vikings have is they’re 8-2, still control the NFC North and have time to figure things out. The good news, also, is they responded from their first loss at Philadelphia with seven straight wins, all in tight games.

Vikings continue to prepare for Patriots

The Minnesota Vikings continue to prepare to take on the New England Patriots on Thanksgiving Day. FOX 9’s Ahmad Hicks has the latest.

But it doesn’t mean there’s not a sense of urgency as they get ready to host the New England Patriots Thursday night.

"I think it’s both. You have to be critical, you have to improve, you have to figure things out. At the same time, you remind yourself they each count one, and if we had lost by one point, if we lost in a blowout, if we win, it’s simply one," quarterback Kirk Cousins said. "No one game is going to, it shouldn’t move the needle too much in any direction. The key is correcting things and not ever letting it become more than one."

Kevin O’Connell played for Bill Belichick with the Patriots in 2008, was in a blowout loss to the Miami Dolphins. So what did he learn in moving forward?

"I just remember it was about acknowledging the reality of the game, what happened, what took place, the things we did or didn’t do that might have contributed to losing that game. Then how do we fix those things, how do we rectify any problems we can, the things that we can control by doing our job," O’Connell said. "That message was always direct, forward and something that was followed up by the entire coaching staff. That sticks with me to this very day."

We’ll see how the Vikings respond in front of a national audience for the second time in four days.

There’s no way around it, things got ugly against the Cowboys for the Vikings’ offense. Cousins was sacked career-high seven times, lost a fumble on the first series of the game and was pressured on more than 60 percent of his attempts.

How do they fix it, with Christian Darrisaw out with a concussion?

"Block. We’re men, we don’t want Kirk to hit the ground. Us as men, we’re going to look ourselves in the mirror and correct that," Cook said.

The Patriots feature the NFL sack leader in Matt Judon, who has 13 in 10 games. How do the Vikings adjust? Run the ball more with Cook? Short passes to get the ball out quickly? Cousins wasn’t ready to divulge the game plan on Tuesday.

"Yeah I don’t think I’m going to tell you that answer. I don’t know why I would, that would be really dumb so I’ll just leave it at that," Cousins said. "Maybe in the offseason we can talk football at a restaurant without a microphone in my face and we could have a great time. Right now with the lights on me, I’m just going to be dumb and act like I don’t know football."

It’s up to O’Connell as the play-caller to make the adjustments and allow Cousins time to get the ball downfield. Judon will make that a challenge.

"I think Judon is having one of the best defensive seasons going right now in our league. When you turn on the tape, it’s easy to see why," O’Connell said.

With a quick turnaround to host the Patriots on Thanksgiving night, the Vikings are holding glorified walk-throughs until kickoff. Andrew Booth Jr. (knee) did not practice Tuesday and Darrisaw is already ruled out. Akayleb Evans (concussion) was limited, as were Za’Darius Smith (knee) and Dalvin Tomlinson (calf).

If Evans can’t go, it means snaps for Duke Shelley, with Cam Dantzler still on injured reserve. Blake Brandel will play with Darrisaw out.