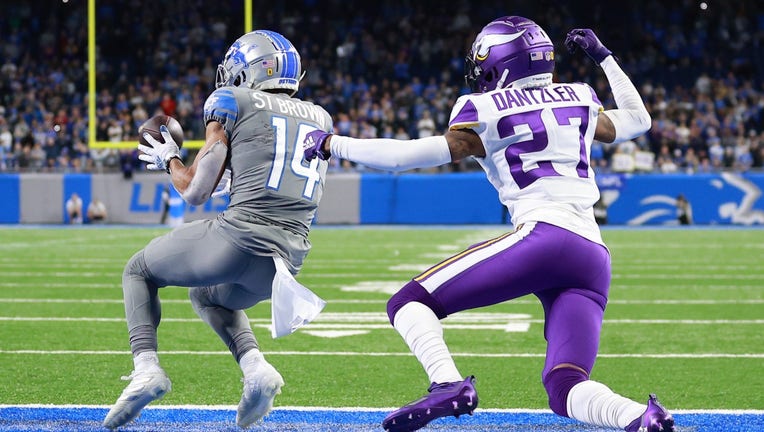 Amon-Ra St. Brown #14 of the Detroit Lions catches the ball for a touchdown as the clock expires to defeat the Minnesota Vikings 29-27 at Ford Field on December 05, 2021 in Detroit, Michigan.  ((Photo by Rey Del Rio/Getty Images))

MINNEAPOLIS - The Minnesota Vikings are moving on from Sunday’s 29-27 walk-off loss to the Detroit Lions at Ford Field, even if the rest of us aren’t.

Players and coaches have no other choice. The Vikings have another game in three days, hosting the Pittsburgh Steelers for Thursday Night Football at U.S. Bank Stadium. But it’s the end of Sunday’s loss that has fans fuming, and the team searching for answers.

Leading 27-23 with 1:50 to play, the Vikings’ defense took the field. Mike Zimmer opted to rush just three defenders at Jared Goff, leaving eight in pass coverage. Goff drove the Lions 75 yards in 14 plays. On that 14th play, Cam Dantzler was in soft coverage on Amon-Ra St. Brown, four yards into the end zone. St. Brown cut his route off at the goal line, and Goff hit him for the 11-yard, game-winning touchdown. It was the Lions’ first win in 364 days.

To that point, Detroit had five drives in the second half. They consisted of two 3-and-outs, a field goal, Dantzler intercepting Goff and Blake Lynch getting a strip sack fumble that the Vikings turned into the go-ahead touchdown. Like it has so many other times this season, the Vikings’ defense fell apart at the game’s most critical juncture.

"I feel horrible. We did all this for it to come down to the last play of the game, for them to score. We’ve got to get to the quarterback by any means. We trust the guys to execute, and we just weren’t able to do it," defensive end D.J. Wonnum said Monday.

Lynch, who had two sacks, including the strip sack fumble, nine tackles, six solo tackles and a tackle for a loss, didn’t feel much like celebrating his first real contribution of the season. Lynch had to step up, with Anthony Barr and Eric Kendricks each out injured.

"Ultimately our job is to win the game, and we didn’t do that. We didn’t do a good enough job as players to win, so that’s really my main focus is contributing however I can to get a win," Lynch said.

MASON COLE SHIFTS TO GUARD WITH CHRISTIAN DARRISAW OUT

The Vikings had to shake up their offensive line Sunday, with Christian Darrisaw out due to a bad ankle. The line consisted of Oli Udoh, Mason Cole, Garrett Bradbury, Ezra Cleveland and Brian O’Neill. Cole, who played center while Bradbury was on the reserve/COVID-19 list, knew he’d be moving to guard with Darrisaw out.

Behind that line, Alexander Mattison had 124 total yards and Kirk Cousins threw for 326 yards and two touchdowns. Cole says he’s getting more comfortable on this offensive line.

"There’s always a few plays you wish you could have back, but overall I think it went well. It’s a little different, but I feel confident at any three of those interior spots," Cole said.

NO MARGIN FOR ERROR WITH 5 GAMES LEFT

The Vikings’ loss Sunday was damaging in multiple ways. They fell to 2-1 in the NFC North, 5-7 on the season and put themselves on the outside of the NFC Playoff picture. All that, and giving a Lions’ team its first win in a calendar year.

The Vikings are now in the No. 9 spot in the NFC with five regular season games left. The 24-hour rule is in full effect at TCO Performance Center, with the Steelers coming to town Thursday night.

"It’s definitely not easy, but we can’t cry over spilled milk. The game is lost, we’ve got to look ahead to the future. We’ve got to keep going so we can stay in this hunt and get into these playoffs," Wonnum said.

"We have to continue to move forward and continue to fight for it because we can’t do anything to change the past," Mattison said. "We can do something about our future, and with trying to get to the playoffs, we have to learn from that and continue to push forward, fight for our goals."