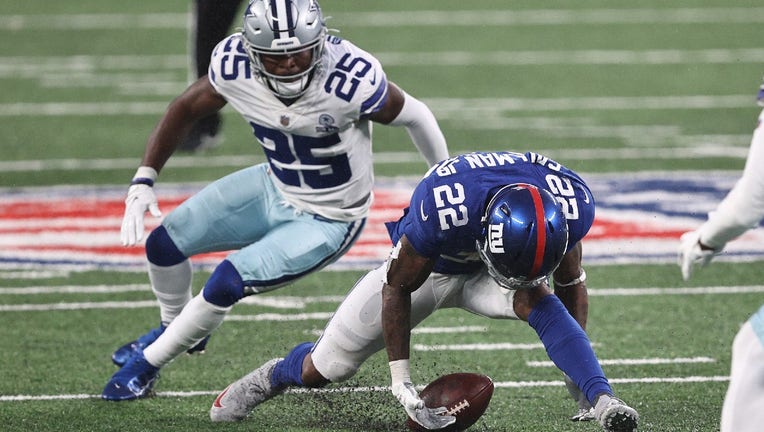 Wayne Gallman #22 of the New York Giants recovers his own fumble after a first down reception against the Dallas Cowboys during the final minute of the fourth quarter at MetLife Stadium on January 03, 2021 in East Rutherford, New Jersey. ((Photo by Elsa/Getty Images))

MINNEAPOLIS - The Minnesota Vikings losing Anthony Harris in free agency to the Philadelphia Eagles meant there was an opening in the secondary.

That opening is now an opportunity for Xavier Woods, who signed with the Vikings on Monday and officially joined the team after completing a physical. Woods is entering his fifth NFL season after being drafted by the Dallas Cowboys in the sixth round in 2017. He’ll provide another veteran presence on Mike Zimmer’s defense in 2021.

"I talked to him on the phone before he signed. I told him that this is going to be a good situation for him here. The things that we do are things that he’s done before. I watch all the tapes on him, he’s got another level to go to and I think he’s also got a chip on his shoulder. I like that in a lot of guys, I like bringing in guys when other people say they’re probably not good enough somewhere else," Zimmer told reporters Wednesday via Zoom.

So what was his biggest motivation for coming to Minnesota? Getting to play alongside Harrison Smith.

Woods has played in 60 career games and started 48, including all 15 in each of the last two seasons. In 2019, he had 52 tackles, two interceptions and five passes defended. He also forced two fumbles and had a fumble recovery.

For the Vikings, who have already added Peterson, Dalvin Tomlinson and Mackensie Alexander in free agency, Harris’s departure is Woods’ gain.

He also admitted his 2020 season didn’t meet his standards. In 15 starts, he didn’t get an interception, had 72 tackles, two tackles for a loss and one quarterback hit.

"I reviewed it, I now know what I need to work on as far as to not be in that situation again, not to play like that again. I’m working each and every day to better myself so that doesn’t happen again. Me personally, yeah I definitely had a bad season," Woods said.

After being depleted by injuries last season and relying on young players in the secondary, the Vikings have added depth and experience at the line and on the back end. Only time will tell how much netter the defense is after Zimmer said it plain and simple after the season, his defense last year was one of the worst he’s had.