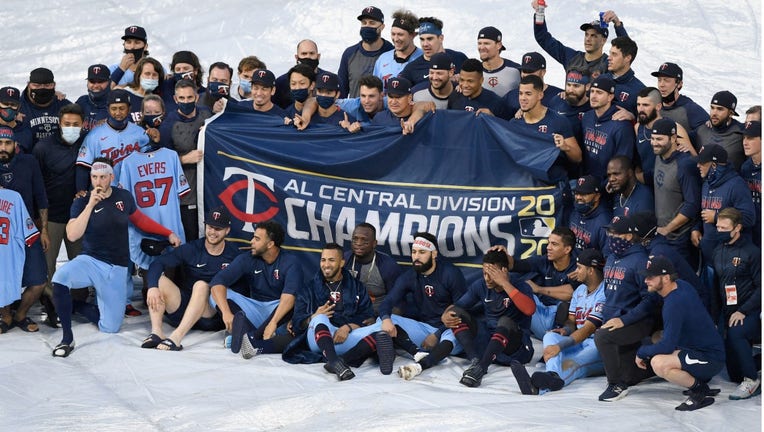 The Minnesota Twins celebrate being the American League Central Division Champions after the game against the Cincinnati Reds at Target Field on September 27, 2020 in Minneapolis, Minnesota. The Reds defeated the Twins 5-3 in ten innings. ((Photo by Hannah Foslien/Getty Images))

MINNEAPOLIS - The Minnesota Twins open the 2020 American League Wild Card Playoffs on Tuesday against the Houston Astros at Target Field, and manager Rocco Baldelli doesn’t yet know if center fielder Byron Buxton and third baseman Josh Donaldson will be in the lineup.

Baldelli and the Twins don’t have to submit their playoff roster for the Wild Card series until Tuesday morning. Donaldson has been dealing with a calf issue most of the season, and Buxton is coming off mild concussion symptoms after getting hit in the head by a pitch over the weekend.

Both participated in the team’s workout at Target Field Monday, taking batting practice and fielding.

“We just want to learn as much as we can before we move forward and put anything in stone. It was a relatively good day for both guys, but we’re going to hold off on anything firm,” Baldelli said Monday.

The Astros were in town Monday and worked out at Target Field after the Twins ahead of the Wild Card round matchup.

In 28 games and 81 regular season at-bats, Donaldson hit .222 with six homers and 11 RBI. Buxton played in 39 games, hitting .254 with 13 homers and 27 RBI. He has the greatest impact on defense in center, taking away extra base hits from the opponent.

What we do know is who will be on the mound Tuesday. Baldelli is giving the Game 1 start to Kenta Maeda, traded to the Twins in the off-season. He’s been one of the best pitchers in the American League, going 6-1 in 11 starts with a 2.70 earned run average.

“He’s been a star for us all year long. From the very beginning of the year, first start, he goes out there and pitches his butt off. The results speak for themselves, and then everything you get in between his starts also inspires a tremendous amount of confidence in him,” Baldelli said. “I feel good about it, it’s hard not to like what we’ve seen.”

Maeda expects some nerves on Tuesday, but feels more fresh than normal after pitching 66 2/3 innings in a 60-game season shortened due to the COVID-19 pandemic, and tense labor negotiations.

“As soon as tomorrow comes, I think that’s when the energy kicks in, more excitement, get that feeling for sure,” Maeda said.

It wasn’t that long ago that Maeda took a no-hitter into the ninth inning, then exited the game after 115 pitches.

“He’s been everything that we’ve been looking for. He’s been the guy that kept us in balance,” designated hitter Nelson Cruz said. “Any time we needed a good start or a win, he showed up.”

Jose Berrios will start Game 2, and if a Game 3 is necessarily, the ball likely goes to Kenta Maeda.

The Twins’ playoff history is well-chronicled, and it’s probably why they’re welcoming the Houston Astros to Target Field. That’s despite the Astros being in the ALCS three straight years, and winning the World Series in 2017.

Tuesday marks the start of a best-of-three series, all at Target Field, after the Twins won their second straight AL Central title with a 36-24 record. The winner of Game 1 has the inside track to AL Division Series bubble, either in San Diego or Los Angeles. It’s different, but it’s still playoff baseball.