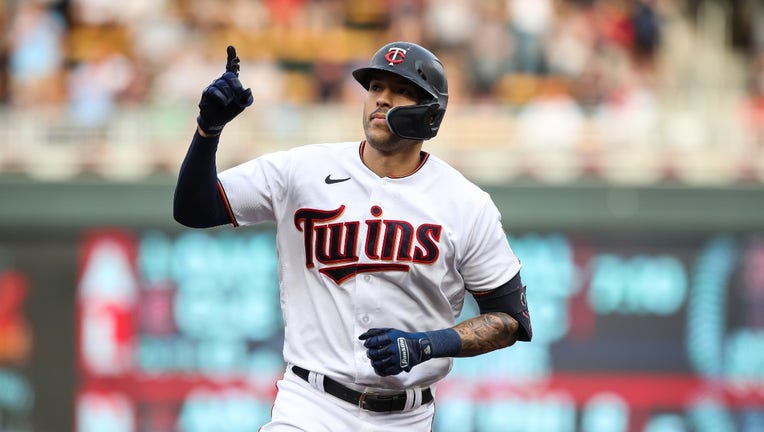 Carlos Correa #4 of the Minnesota Twins celebrates his solo home run as he rounds the bases, the third of three solo home runs in a row in the first inning of the game against the New York Yankees at Target Field on June 9, 2022 in Minneapolis, Minne ((Photo by David Berding/Getty Images))

MINNEAPOLIS - The Minnesota Twins let a golden opportunity for a rare series win over the New York Yankees slip away Thursday night at Target Field, and have nobody to blame but themselves.

The Twins hit five homers off Gerrit Cole, handing him his worst start of the season and an exit after less than three innings, and it still wasn’t enough in a 10-7 loss to the Yankees. The Twins’ bullpen faltered, allowing six runs over four innings, but a play between a pair of veteran infielders in the sixth inning might have stood out the most.

Gleybor Torres hit an infield pop-up, and it appeared Jorge Polanco was getting under it. Carlos Correa stopped, thinking Polanco had it. The ball fell harmlessly between second and third for a hit. It should’ve been the first out of the inning.

Instead, former Twin Aaron Hicks followed with a game-tying two-run blast into the plaza in right field.

"[Correa] trusted me," Polanco told reporters after the loss. "It was my fault. I got my eye off the ball. … We just try to forget that and come back tomorrow and try to make the plays."

"It’s both our faults," Correa said. "It’s a ball that’s got to be caught by either him or me, and it’s a mistake that happened in a key situation in the game. But we’re going to learn from it and make sure it doesn’t happen ever again and move forward."

Correa is a three-time All-Star. He’s won a World Series. He signed a three-year deal worth more than $100 million to join the Twins. Polanco has been a solid, steady defender at second for the Twins. It’s the type of miscommunication that simply can’t happen in the major leagues. You would expect it in little league, not with some of the best players in the game.

"You're going to struggle. You're going to make errors," Correa said. "It's all part of the game. The way, mentally, you approach things the next day, it's what sets you apart from the rest, and that's what we've been doing all year when we hit a rough patch here and there."

"It’s what happens after a play like that. How do you stay in control and realize that’s still our ballgame to win? We still absolutely are in control of what ends up happening. We know what we have to do."

Polanco also had a throwing error in the seventh that led to another RBI for Hicks.

The Twins started the night with three straight homers, pounded one of the best pitchers in the game and let a game they should’ve won slip away. They dropped to 33-26 on the season, and lead the American League Central Division by 3.5 games after the Cleveland Guardians beat Oakland Thursday night.

The Twins were remarkably positive after playing well enough to get a series win over the Yankees, but only getting one game.

"I was really happy with the way we came out playing a really good team, maybe one of the best teams in baseball. We think we’re right there too," Baldelli said. "We went right at them, went after one of the best starters in baseball and hit him around pretty good. Couldn’t have been happier with the at-bats that we had."

Byron Buxton homered twice and had four RBI on the night, but didn’t get the payoff.

"We didn’t get the win, but we saw a lot of positive things to let people know this ain’t a fluke," Buxton said.

The good news for the Twins is that series is now in the past, and the Tampa Bay Rays are in town for the weekend.