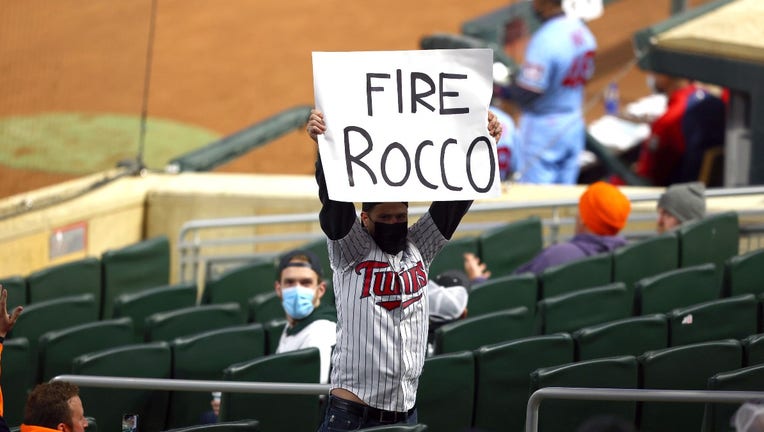 A fan holds a "Fire Rocco" sign in the sixth inning during the game between the Minnesota Twins and the Texas Rangers at Target Field on May 05, 2021 in Minneapolis, Minnesota. ((Photo by Adam Bettcher/Getty Images))

MINNEAPOLIS - How quickly times have changed for the Minnesota Twins at Target Field.

The Twins are just 29 games into the 2021 season, but fans are growing tired and frustrated by the team’s slow start. Enough that a fan was spotted holding a "Fire Rocco" sign in the front row of the Champions Club in the late innings of Wednesday’s 3-1 loss to the Texas Rangers at Target Field.

Rocco Baldelli, who is in his third season as Twins manager, has led the team to a pair of American League Central Division titles and won the AL Manager of the Year in his first season. But fans are getting impatient as the team is off to an 11-18 start, fourth in the AL Central. Bally Sports North cameras caught the fan holding the sign, then quickly switched camera angles. By the time they went back to the home plate angle, the fan had been taken away by an usher.

Lately, it’s been the bullpen that’s given the Twins problems. Wednesday, it was a lineup that couldn’t do much against Texas pitching. Minnesota’s only run came off a Mitch Garver home run. Early in the game, the Twins had the bases load with nobody out, but failed to score as Miguel Sano ended the threat with a fielder’s choice.

It was just one piece of an 0-for-3 night for Minnesota sports. The Twins host the Rangers at 12:10 pm. Thursday, needing a win to finish the home stand 4-3.

The Minnesota Wild had arguably the best showing of the night as it battles for home ice in the Stanley Cup Playoffs with the regular season coming to a close.

Rookie sensation Kirill Kaprizov scored both Wild goals Wednesday night, but the Golden Knights got a goal from Alex Pietrangelo in overtime to take the 3-2 win from Minnesota. The fact that the game even got to overtime irked the Wild, as Mats Zuccarello was called for a questionable hooking penalty with the Wild up 2-1. Reilly Smith took advantage, scoring a power-play goal with 4:16 left in regulation that eventually sent the game to overtime.

Wild forward Marcus Foligno was asked about Zuccarello’s penalty after the game.

The Wild sits at 71 points in the Honda West, in the No. 3 spot and one behind Colorado with four games to play after the Avalanche lost Wednesday night. The Golden Knights have the No. 1 spot at 76 points. The Wild (33-14-5) host Anaheim Friday night.

Defense was optional Wednesday night, as it has been much of the season for the Minnesota Timberwolves, in a 139-135 loss to the Memphis Grizzlies. The Wolves dropped to 20-46 on the season and have six games left in the 2020-21 season.

Fresh off being named the Western Conference Rookie of the Month for the second straight time, Anthony Edwards put up 42 points for the Wolves, shooting 17-of-22 from the field, including 8-of-9 from three-point range. Karl-Anthony Towns and D’Angelo Russell added 22 points each, but it wasn’t enough for a win.

The Timberwolves have the second-worst record in the Western Conference, behind only the Houston Rockets, and need to finish in the top 3 of the NBA Draft Lottery to keep their 2021 NBA Draft pick. Otherwise, it goes to the Golden State Warriors in the deal last year that sent Andrew Wiggins to the Warriors for Russell.