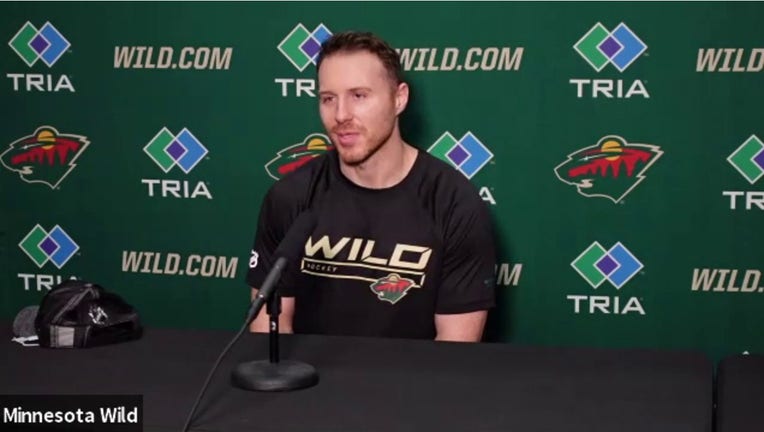 Defenseman Ian Cole will make his debut Wednesday night after being traded from Colorado to the Minnesota Wild.

MINNEAPOLIS - Ian Cole was having a big pregame meal Tuesday night when his phone rang. The defenseman with the Colorado Avalanche was getting ready to face the Los Angeles Kings.

He picked up his phone, and Minnesota Wild General Manager Bill Guerin was on the other end. He had been traded from the Avalanche to the Wild, and Guerin wanted him in Anaheim to play against the Ducks Wednesday night. The conversation was short and sweet.

"Basically get down to Anaheim, we’ve got a game tomorrow. The goal here is to win hockey games, and that’s it. That’s what I’m here helping to do," Cole said Wednesday after his first skate with the Wild.

Cole will be in the lineup, playing defense alongside Carson Soucy, when the Wild face the Ducks Wednesday night.

"Looking forward to it, it’s going to be a lot of fun and the guys seem awesome," Cole said.

The trade worked out perfectly for both teams, with Greg Pateryn getting dealt to Colorado. With the Wild and Avalanche being in California about two hours apart, Cole could get a car service to drive him to Anaheim. No quarantine required for Cole to be in uniform.

Wild coach Dean Evason got his first look at Cole at morning skate on Wednesday.

"We are getting a physical, leadership defenseman. Won two Stanley Cups, we’re real excited about his presence on the ice," Evason said. "All indications are he’s a great teammate, so we’re looking forward to him fitting in real well with the group."

Cole is in his 11th NHL season, and had a few connections with the Wild before coming to Minnesota. He played for three-plus seasons with the Pittsburgh Penguins, winning two Stanley Cup titles with Guerin as the general manager.

Current Wild center Nick Bonino was his teammate with the Penguins, and one of the first Cole reached out to after the trade.

"He’s a great guy, a really solid player. Knowing Cole and what he’ll do for a team, he’s very selfless. He’ll throw himself in front of pucks, he moves the puck well. On and off the ice he’s a great guy, and I’m happy to have him," Bonino said.

He scouts himself as a stay-at-home defenseman who first stops an attack, then gets the puck out of the zone to a forward as fast as possible. He joked he won’t be taking anyone’s place on the power play any time soon.

His near future includes getting to know his new teammates, making sure he has enough clothes for the rest of Minnesota’s road trip and finding a place to live in the Twin Cities. He’ll get a chance to return to his current home when the Wild is in Colorado in the first week of February.

Cole has won at the highest level in the NHL, and wants to help the Wild get there.

"Just be a good teammate first and foremost. How can I help? Where can I add in? Where can I help the team get better? That’s really it. I know what my role is and I’m going to come in and try to do it to the best of my ability and help the team win hockey games," Cole said.