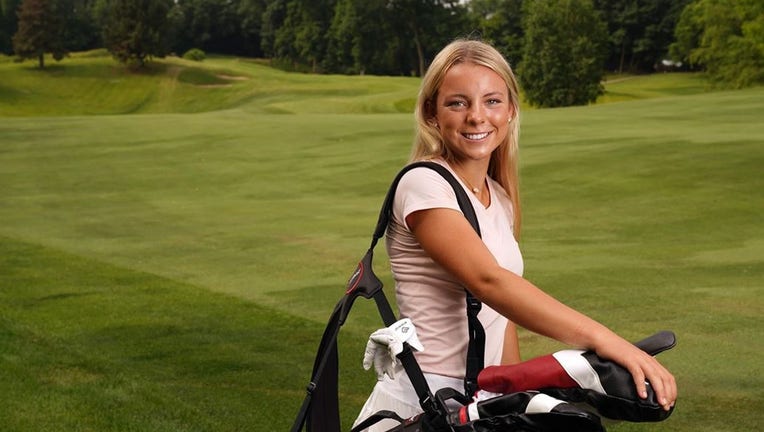 Simley golf star Isabella McCauley will stay home to play for the Gophers in 2022 after signing with Minnesota in November. ((credit: University of Minnesota Athletics))

MINNEAPOLIS - Rhyll Brinsmead was just two months into her tenure as University of Minnesota women’s golf coach when she got a text message that she hopes changes everything for the program.

The Gophers were in South Carolina at the Briar’s Creek Invitational last March, having just completed a full day of 36-hole competition. Brinsmead got a text message, from Simley High School star and Inver Grove Heights native Isabella McCauley, the top player in Minnesota and one of the best in the nation.

University of Minnesota women's golf coach Rhyll Brinsmead talked this week about Simley star Isabella McCauley signing to play with the Gophers in 2022.

Brinsmead was not optimistic, figuring McCauley would want to talk right then and there over the phone if she wanted to make a verbal commitment to the Gophers.

"I said ‘Hey we’re going to be traveling, can we do this call right now?’ I’m thinking let’s just get this over with," Brinsmead said.

The Gophers’ head coach, assistant Matt Higgins and McCauley all connected via FaceTime. Brinsmead was bracing for disappointment, with McCauley having narrowed her college options from five schools to three and Minnesota still involved. But due to COVID-19, Brinsmead hadn’t been able to have McCauley on campus for an official visit. She hadn’t even seen the prep phenom play in-person.

McCauley sat up in her chair, and the phone revealed she was sporting a Minnesota hooded sweatshirt. She gave Brinsmead her verbal commitment to play for the Gophers in 2022. One of the best female amateur players in the country will play for her home school.

"I screamed, the team was in the room next to me and they all came running in. I said ‘she’s coming!’ In 17 years of doing this, it was one of those moments I’ll never forget because it means so much to not just our program, but the university and the Minnesota golf community," Brinsmead said. "Anybody that knows the golf community, it was just awesome."

McCauley made that commitment official last month, signing a National Letter of Intent to attend Minnesota in 2022.

"I chose the University of Minnesota because of the amazing team culture and coaches," McCauley said last month. "Being able to stay close to my family was a major factor as well."

McCauley is well-known in Minnesota golf circles. She’s the top high school player in the state, and made headlines twice in 2021. She became the first woman to win the Minnesota Golf Champions tournament, which features the best male and female players in the state, shooting 9-under par over three rounds. She went wire-to-wire at Minneapolis Golf Club. Most recently, McCauley was the runner-up in the Notah Begay III Junior Golf National Championship.

This past summer, McCauley became the youngest Minnesotan ever to qualify for the U.S. Women’s Open. She just missed making the cut at The Olympic Club in San Francisco. She was just 17 years old at the time, and it was Brinsmead’s first time watching her play live. McCauley’s week included a practice round with star Michelle Wie.

"Here’s this kid playing with these seasoned tour professionals. I knew she was good, but to watch her play 36 holes at the U.S. Open and she missed the cut by 1 or 2, she’s the real deal," Brinsmead said. "She just plays like she’s been doing it for years, she’s got this killer instinct about her. She went out in that second round and shot under par on one of the hardest golf course set ups I’ve ever seen. She’s got the whole package."

Brinsmead thought she might have a chance to keep McCauley early on. In her first week on the job, McCauley was one of the first reach out via email. They couldn’t meet in person because of a recruiting dead period, so the communication was over FaceTime and on the phone.

Brinsmead’s message was clear: If the local talent is there, she wants them to be Gophers.

"I could tell straight away she was willing to listen to what we were going to sell and the direction we wanted to take this program. We kept on telling her you could be the hometown hero," Brinsmead said. "Our goal is to keep the Minnesota kids home that can play at this level. It’s important, this state is golf crazy. I was in Georgia for 13 years, I’ve never lived somewhere that loves golf as much as Minnesota does."