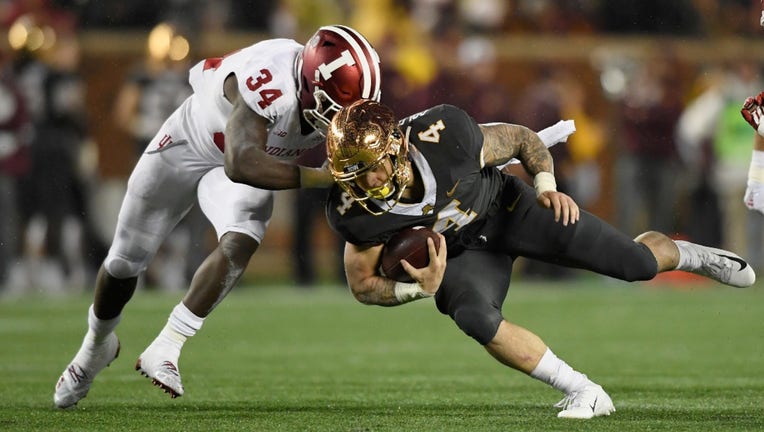 Cam Jones #34 of the Indiana Hoosiers tackles Shannon Brooks #4 of the Minnesota Golden Gophers during the third quarter of the game on October 26, 2018 at TCF Bank Stadium in Minneapolis, Minnesota. Minnesota defeated Indiana 38-31. ((Photo by Hannah Foslien/Getty Images))

MINNEAPOLIS - Shannon Brooks has been waiting almost a year for the moment that’s likely going to come Saturday afternoon as the University of Minnesota football team opens Big Ten play at Purdue.

Brooks has been practicing and is expected to play against the Boilermakers after suffering his second knee injury in as many years in the middle of last season. It was Oct. 12, 2018, and Brooks had to leave the Gophers’ 38-31 win over Indiana with a knee injury. It was his first game back from another knee injury suffered in offseason training after the 2017 season, and he had rushed 22 times for 154 yards and a touchdown against the Hoosiers.

One of the Gophers’ top rushing threats was back, until the injury forced him to sit again. He missed the rest of the season, but opted to come back for his redshirt senior season.

“It’s a very good thing. Having Shannon back, it’s very exciting to see everything he’s gone through in the past year, two years, all the adversity he’s faced, to be able to fight through that and be able to come back,” Gophers’ quarterback Tanner Morgan said. “It’s just really exciting, he’s looking really good and we’re really excited to get him back out on the field.”

In 29 career games, Brooks has 1,882 yards, which ranks 18th all time. He’d likely be much higher on that list with four healthy seasons. He’s got 18 career touchdowns, and five of them are on plays 37 yards or longer.

He’s a potential home run hitter for the Gophers’ offense as it hits the road for its first Big Ten game after getting tested in three straight non-conference games.

“When Shannon gets the ball, he’s going to run as hard as he can every single time he gets it. Head down, full throttle, no stopping. That’s just how he is, he attacks and attacks and attacks, that’s all he knows how to do,” Morgan said.

The only guy that might be happier to have Brooks back is coach PJ Fleck. The Gophers were down to Bryce Williams as the only healthy running back against Georgia Southern. Mohamid Ibrahim didn’t play against the Eagles with an injury, and Rodney Smith and freshman Cam Wiley couldn’t finish the game due to injuries.

Williams finished with 14 carries for 28 yards and a touchdown. If that’s not enough, freshman Trey Potts had to be ready.

After the team’s bye week, it appears all the running backs are healthy. If the depth chart is any indication, the Boilermakers will see any combination of Smith, Brooks and Ibrahim.

“I think there’s that spunk, that look in his eye that he cannot wait to get back on the field. And you combine him with our other backs, I think that’s where we want to be,” Fleck said.

Brooks has every reason to be excited to start his season on the road at Purdue. He’s rushed for more than 100 yards twice at West Lafayette. He had 18 carries for 116 yards in a loss there in 2017. But go back to his freshman year in 2015 for his best memory of playing the Boilermakers.

He had 17 carries for 176 yards and a touchdown. It was the first of two games in his freshman year rushing for 170+ yards.

“I remember that game,” said defensive end Sam Renner, who practices against Brooks daily. "Shannon is a really good back, a really physical back. He’s a great addition, he’s got really fresh legs and he’s looking really good in practice. I’m really happy to have him back."

The Gophers should try to do whatever they can to get Brooks in the end zone. Minnesota is 12-2 in games where he scores a touchdown.

Brooks has had to be a coach and a fan from the sidelines while his teammates had to grind through three non-conference wins. Now, he gets his final chance to put on his own show starting Saturday.