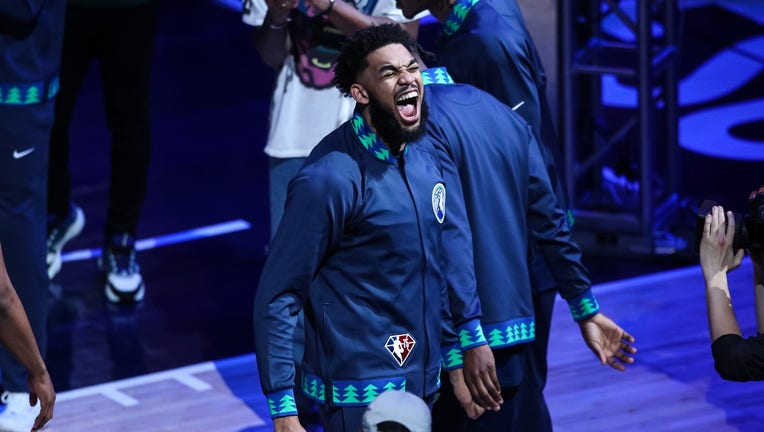 Karl-Anthony Towns #32 of the Minnesota Timberwolves yells during player introductions before the start of Game Six of the Western Conference First Round against the Memphis Grizzlies at Target Center on April 29, 2022 in Minneapolis, Minnesota. ((Photo by David Berding/Getty Images))

MINNEAPOLIS - Karl-Anthony Towns is the face of the Minnesota Timberwolves, and he’s set to receive a big payday from the franchise after NBA free agency started on Thursday.

According to ESPN's Adrian Wojnarowski, the Timberwolves and Towns have agreed to a four-year extension worth $224 million. Towns became eligible for the super max extension this season after earning Third Team All-NBA honors for the second time in his career. Towns had been under contract for the next two seasons and could’ve been eligible to be an unrestricted free agent after the 2023-24 season.

With the new deal, Towns would be under contract through the 2027-28 season.

Towns was the Timberwolves’ No. 1 overall draft pick in 2015 and is entering his eighth season in Minnesota. He played 74 regular season games last season, averaging 24.6 points, 9.8 rebounds and 3.6 assists per game. He also shot 41 percent from the perimeter, and won the 3-Point Contest as part of NBA All-Star Weekend.

Giving Towns the maximum contract extension was an early priority for the new ownership group, led by Alex Rodriguez and Marc Lore, and new President of Basketball Operations Tim Connelly. Head coach Chris Finch said as much earlier this week, when the Timberwolves introduced their three newest draft picks at Target Center.

"It’s all of our hopes really. We know he’s happy, we’re extremely happy for him and for the ability to have this extension. I know he worked hard for it and he’s excited, so I think it’ll be a special moment for him and for this organization," Finch said.

Towns has been the subject of trade rumors the last several years, but has consistently said he wants to play in Minnesota his entire career.

Keeping Towns isn’t the only move the Timberwolves have made. They signed Taurean Prince to a two-year extension, and have exercised options on Jaylen Nowell and Naz Reid. They've also reportedly agreed to a two-year deal with veteran guard Kyle Anderson.