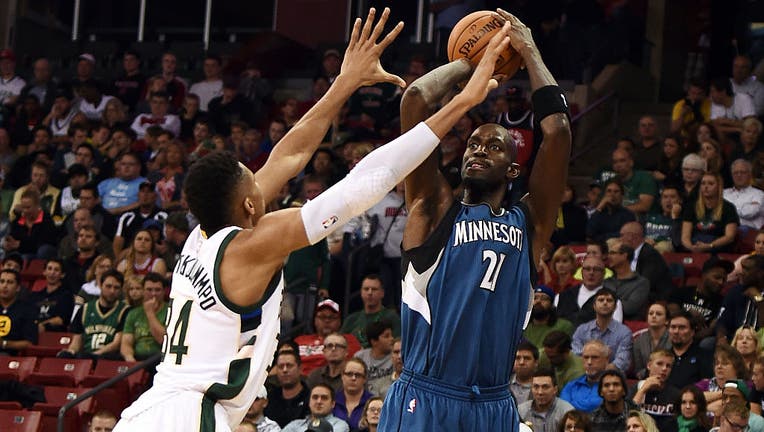 MADISON, WI - OCTOBER 20: Kevin Garnett #21 of the Minnesota Timberwolves shoots over Giannis Antetokounmpo #34 of the Milwaukee Bucks during a preseason NBA game at the Kohl Center on October 20, 2015 in Madison, Wisconsin.NOTE TO USER: User express ((Photo by Stacy Revere/Getty Images) / Getty Images)

MINNEAPOLIS - Kevin Garnett will always love Minnesota Timberwolves fans, but it doesn’t sound like his No. 21 jersey will hang from the Target Center rafters any time soon.

Or at least as long as Glen Taylor owns the franchise. Garnett, who has drafted by the Wolves and spent his first 12 NBA seasons in Minnesota, had harsh words for Taylor on Tuesday in an interview done by The Athletic.

“I don’t want any dealings with Glen Taylor or Taylor Corp., or anything that has to do with him. I love my Timberwolves, but I don’t do business with snakes,” Garnett told Shams Charania of The Athletic.

The No. 5 overall pick out of high school in 1995, Garnett won the NBA MVP award with the Wolves in 2004 after leading Minnesota to the Western Conference Finals. That was one of several playoff appearances Garnett had with Minnesota. He won an NBA title with the Boston Celtics in 2008, is a 15-time All-Star and was named All-NBA First Team four times. He was named to the NBA's All-Defensive First Team nine times.

Garnett left the Wolves after they traded him to the Celtics in 2007, and Flip Saunders brought him back in a trade during the 2014-15 season. The theory there being his return was the start to him having a future ownership stake in the Timberwolves’ franchise.

Saunders then died of cancer, and Garnett’s relationship with the Wolves faded after Taylor brought in Tom Thibodeau to be the head coach and president of basketball operations.