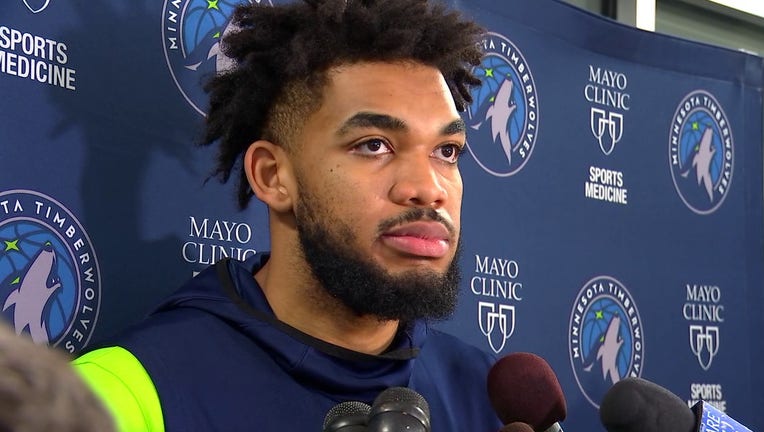 According to an ESPN report, Timberwolves star Karl-Anthony Towns got stem cell and platelet-rich plasma injections on Friday to heal injuries and avoid offseason surgery.

MINNEAPOLIS - The Minnesota Timberwolves got to the NBA Playoffs for just the second time since 2004 this season, and we’ve since learned that star Karl-Anthony Towns was dealing with multiple injuries against the Memphis Grizzlies.

According to Ramona Shelburne of ESPN, Towns recently underwent stem cell treatment and platelet-rich plasma injections on injuries to his knee, wrist, ankle and finger late last week. He played through the injuries during the playoffs and got the treatments with the goal of avoiding surgery and being fully-healthy when the team convenes for training camp later this summer.

Towns reportedly dealt with a cyst on his left ankle, pain in both knees and an aggravated joint on the middle finger of his shooting hand. He also missed regular season games with a wrist injury. Towns averaged 21.8 points and 10.8 rebounds per game in six playoff games, while dealing with foul trouble throughout the series against the Memphis Grizzlies.

In a Game 3 loss, Towns took just four shots and finished with a career-low eight points and five rebounds. He also had 33 points and 14 rebounds in a Game 4 win, and 18 points and 10 rebounds in the Game 6 loss that ended the Timberwolves’ season.

Towns’ treatments became public after his girlfriend, Jordyn Woods, posted a photo of him recovering to her Instagram story over the weekend.

Towns played all but eight regular season games in 2021-22, averaging 24.6 points and 9.8 rebounds per game while shooting better than 52 percent from the field. He also won the three-point contest as part of NBA All-Star Weekend.