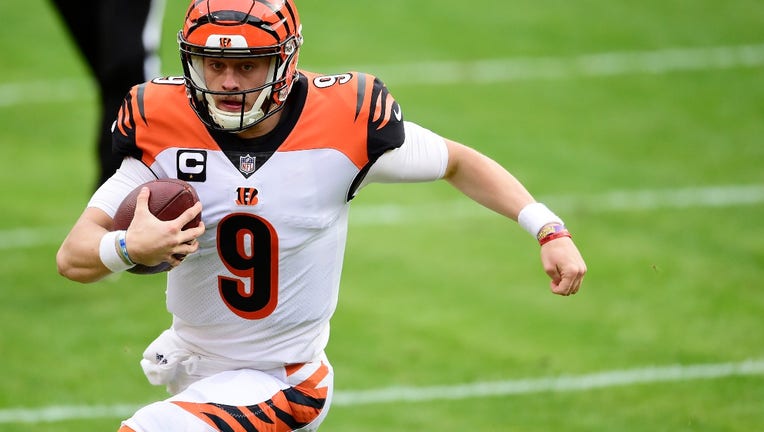 Joe Burrow #9 of the Cincinnati Bengals scrambles with the ball in the first half against the Washington Football Team at FedExField on November 22, 2020 in Landover, Maryland.  ((Photo by Patrick McDermott/Getty Images))

MINNEAPOLIS - The Minnesota Vikings have had rookie minicamp and start organized team activities next week, but we’re already getting a feel for how Week 1 might be taking shape.

The Vikings travel to Cincinnati to face the Bengals, and according to an ESPN report, Joe Burrow appears on track to make his return. Adam Schefter reported Tuesday that Burrow’s surgeon, Dr. Neal ElAttrache in Los Angeles, said he’s all systems go" for Week 1 on Sept. 12.

Burrow suffered a major injury to his left knee in the Bengals’ Nov. 22 loss at Washington. He had reconstructive surgery in early December, and told the Chris Collinsworth podcast that he expects take the first snap when the 2021 season starts.

The Bengals took Burrow with the No. 1 overall pick in the 2020 NFL Draft, and he didn’t disappoint. In 10 starts, he completed better than 65 percent of his passes for 2,688 yards and 13 touchdowns with five interceptions.

It’ll be a tall task defending Burrow for Mike Zimmer and the Vikings, who have spent much of the offseason revamping the entire defense. They expect to get Danielle Hunter back from a neck injury, Michael Pierce returns after opting out of 2020 and they signed Dalvin Tomlinson in free agency.

Anthony Barr and Eric Kendrick should be back healthy, and the Vikings have added Patrick Peterson, Mackensie Alexander and Xavier Woods in free agency to the secondary. They also drafted Camryn Bynum to help out at safety.