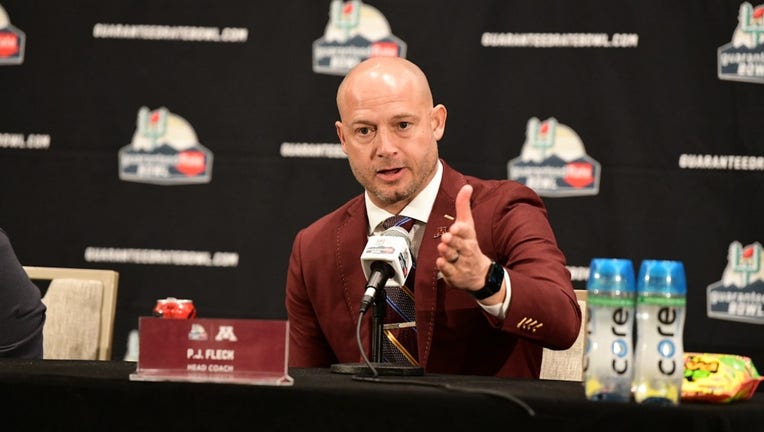 MINNEAPOLIS - PJ Fleck couldn’t be happier that the University of Minnesota football team flew down to Arizona before Christmas for the Guaranteed Rate Bowl.

The Gophers will face West Virginia Tuesday night after beating Wisconsin 23-13 to end the regular season 8-4. As of now, the game is on as scheduled despite COVID-19 cases rising across the country, largely due to the Omicron variant.

Minnesota and West Virginia held their perspective media days on Sunday. Fleck said since the team’s latest round of testing, they have zero COVID-19 cases. On Sunday, Virginia dropped out of the Wasabi Fenway Bowl, and the Military Bowl set between East Carolina and Boston College was canceled.

Last week, Texas A&M had to withdraw from the Gator Bowl. Officials with the College Football Playoff committee had to announce new policies for the national semifinals and title game. A team that doesn’t have enough players due to COVID-19 issues has to forfeit the semifinal game, and the national title game can be pushed back as late as Jan. 14 if needed.

The Vikings were without Dalvin Cook, Sean Mannion, Rashod Hill and Andre Patterson on Sunday due to COVID-19.

For now, the Gophers have gone unscathed.

"So far so good, we've had zero cases. Our players are healthy. Zero cases as of last time we've talked, in terms of we don't have anybody with that right now. That's a credit to our medical team, our medical staff," Fleck said.

Gophers officials said on Thursday they sold out their 4,000 ticket allotment for the Guaranteed Rate Bowl. More fans have purchased tickets on secondary markets, so there should be plenty of fans in the stands in Phoenix Tuesday night.

"We said we're basically taking the state of Minnesota and we're bringing it over here. Our guys have really respected that," Fleck said. "I give credit to a lot of our players. We could talk about who's vaccinated, who's not, boosters. Our medical team has provided the vaccination and the boosters and the majority of our players have taken advantage of that. Then we’re just doing everything we possibly can to keep them safe."