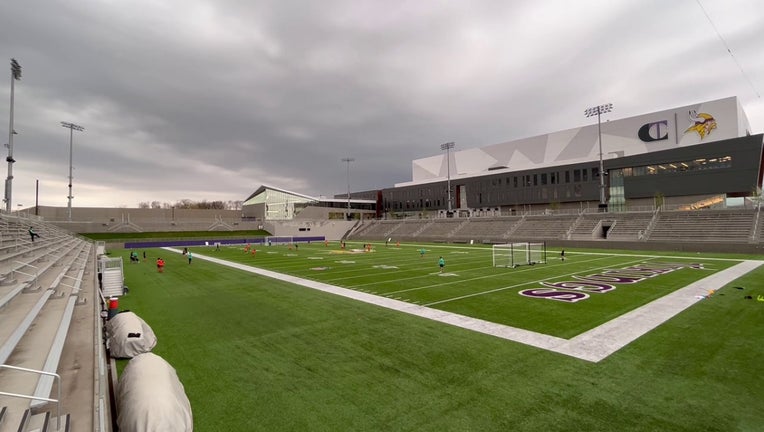 The Minnesota Aurora held their first practice on Monday. (FOX 9)

EAGAN, Minn. (FOX 9) - Under a cloudy sky, you could still catch a glimpse of the Minnesota Aurora on Monday morning.

The community-owned women’s soccer team coming together for the first time in practice. A group ready to shine a new light on the sport.

Under a cloudy sky, you could still catch a glimpse of the Minnesota Aurora on Monday morning. The community-owned women’s soccer team coming together for the first time in practice. A group ready to shine a new light on the sport.

"We’ve gotten a ton of support from the community and I think a lot of people know about us," Aurora forward Morgan Turner said. "There are a lot of people excited about this team and that’s really big for women’s soccer in the state.

As a pre-professional league, the team is one made up of players ready to make names for themselves.

"We have a very wide range of players here from age 16 to 25, and every one of them is in a different part of their career path," Aurora head coach Nicole Lukic said. "This is the team that is going to get them ready to make it to that next level."

One name on the roster already stands out: Sarah Fuller.

Fuller made history as a college athlete. In 2020, she became the first woman to play in and score a point in a "Power 5" football game when she kicked for Vanderbilt University. A trailblazer now continuing her path on the pitch in Minnesota as the Aurora’s goaltender.

"It means a lot more to me because soccer is my sport," Fuller said of this opportunity. "It’s unlike anything I’ve ever done, and I’m very excited for it."

Some players are here to advance a career in soccer, while others joined the roster to keep in touch with their passion. But all on the Aurora are hoping to illuminate a way for women & girls in the sport.

"It was more than just playing soccer," Turner said. "We have the opportunity to put ourselves out there and be role models for a lot of young girls to grow the game."

Minnesota Aurora open up their inaugural season in USL-W later this month. Minnesota will host Green Bay on May 26 at TCO Stadium in Eagan.