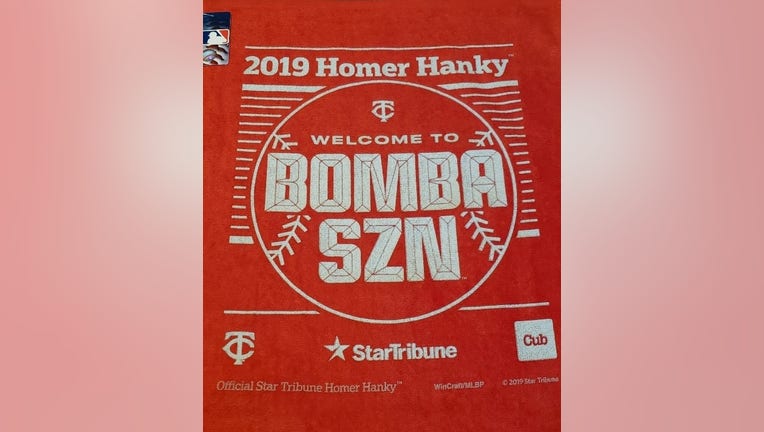 The Homer Hanky makes its return for the 2019 Twins' postseason, this time in the form of a red towel.

MINNEAPOLIS (FOX 9) - Twins’ playoff baseball is returning to Minneapolis next week, which means so is the iconic Homer Hanky.

In an ode to the power-hitting “Bomba Squad” Twins of 2019, the new towels read “Bomba SZN.” Additionally, the new towels are bright red, mirroring the team’s favored red uniforms. The Twins finished 19-8 when wearing their home red uniforms in 2019.

Twins’ playoff baseball is returning to Minneapolis next week, which means so is the iconic Homer Hanky.

While the Hankies of previous postseasons were always white, Major League Baseball changed its rules to no longer allow white rally towels.

The Homer Hanky is originally a creation of the Star Tribune marketing team for Game 1 of the 1987 American League Championship Series at the Metrodome. The Hankies soon became a fixture of every Twins game on their run to the championship that fall. They returned in 1991 for that World Series run and have been a tradition at Minneapolis postseason baseball ever since. 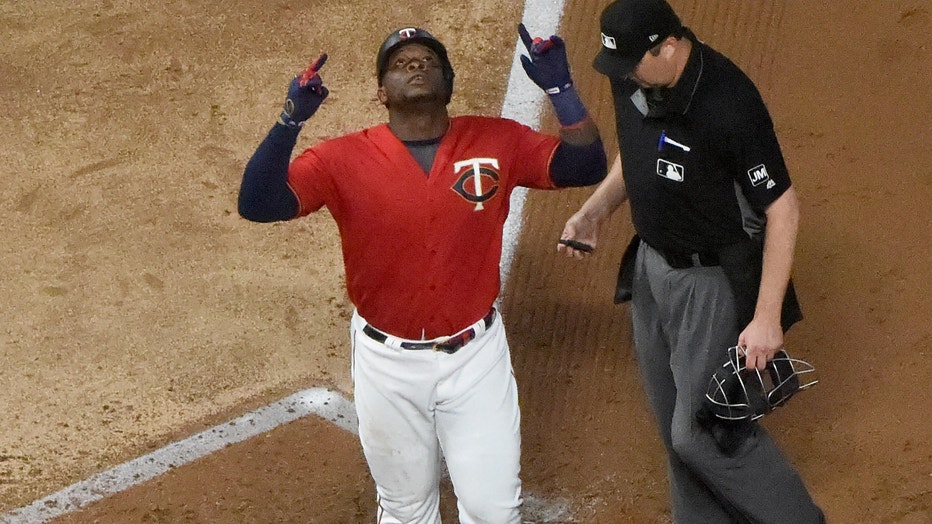 Miguel Sano #22 of the Minnesota Twins celebrates hitting three-run home run against the Chicago White Sox as teammate Eddie Rosario #20 looks on during the third inning of the game at Target Field on September 17, 2019 in Minneapolis, Minnesota. (Hannah Foslien / Getty Images)

“Homer Hankies have long been synonymous with Twins postseason history, earning their place as a must-have collectible for multiple generations of baseball fans. We expect the 2019 Homer Hanky to be a central part of what we hope will be a lengthy Twins postseason run,” said Twins President and CEO Dave St. Peter.

The Twins play their first home postseason game Monday night, Oct. 7 at Target Field. A Homer Hanky will be distributed to every fan who walks through the gates during the ALDS and the ALCS.

The Hankies will also be available for purchase at the Majestic Twins Clubhouse Store and at CUB Foods locations throughout the state. You can also find them online at startribune.com/HomerHanky. Part of each sale will benefit the Minnesota Twins Community Fund.

UPDATE: As of 8:40 a.m. Thursday, the Homer Hankies were officially listed as "on backorder" on the Star Tribune website, selling out in just a few hours Thursday morning. At least one CUB Foods location in the Twin Cities metro area also had sold out of the Hankies by 8:40 a.m.

HOW TO WATCH THE ALDS:

The Twins begin their 5-game ALDS series in the Bronx Friday night against the New York Yankees. FOX 9's Jim Rich will be in New York for Games 1 and 2.

Fan excitement turned to disappointment recently when fans anticipating watching the Twins in the first game of the American League Divisional Series found out it was on a channel many didn't have.

According to MLB Network, AT&T U-Verse, Cablevision [ALTICE], Comcast, COX, DirecTV, Dish, Sling TV, Verizon Fios and other providers will all be offering a free preview of MLB Network through Oct. 11.