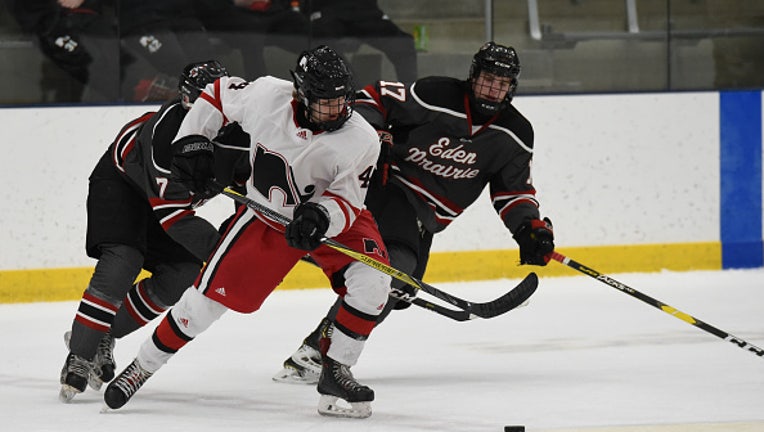 MINNEAPOLIS (FOX 9) - The Minnesota State High School League held its February meeting on Thursday, and there was plenty to sort out as they attempt to hold winter state tournaments amid the COVID-19 pandemic.

The biggest change to come out of Thursday’s meeting is a change of venue for several activities, and reducing the amount of teams and individuals competing in an effort to stop the spread of COVID-19. Fall sports either had their playoffs shortened, or canceled altogether because of the pandemic.

The Minnesota State High School League held its February meeting on Thursday, and there was plenty to sort out as they attempt to hold winter state tournaments amid the COVID-19 pandemic.

The state wrestling tournament will not be held at its annual location, Xcel Energy Center. Instead, MSHSL officials are considering multiple high school sites to host it March 25-27. All three classes would have competition on one day, and four teams from each class will advance to the final venue.

The top two teams from each section go to the state preliminaries, and compete against the top two teams from another section. One team of the four advances to the rest of the tournament. For the individual tournament, there will be four wrestlers in each weight class that advance from the sectional round. Eight of the remaining wrestlers in each weight class gets knocked down to two, with eight final wrestlers left at the state venue to compete for a title.

The state dance competition, typically held at Target Center, will instead move to Edina High School this year and be held March 12-13. The jazz competition will be held Friday, and the high-kick Saturday. There will be no preliminary competition, and there will be three classes, with 12 teams per class and four teams in a session.

Get ready for seven straight days of hockey at Xcel Energy Center to crown four state champions, March 25-April 3. Girls’ quarterfinals will be March 25-26, with boys quarterfinals on March 30-31. Girls semifinals are slated for April 1, boys semifinals are April 2 and title games are on April 3. There will be no consolation bracket, or third place games.

The girls’ and boys’ basketball quarterfinals are slated for March 30-31 at regional sites. State semifinals will be April 6-8, and title games April 9-10, all at Target Center. There will be no consolation bracket, and no third place games.

GYMNASTICS: Moved from U of M to Champlin Park HS

The state gymnastics meet, typically held at the University of Minnesota’s Maturi Pavilion, will be moved to Champlin Park High School. Class A will compete March 26, and Class AA will compete March 27. There will be two sessions each day, with four teams and individuals from the same section in each pod. Any individual on a qualifying team will have one routine per event that will count for both scores.

SWIMMING & DIVING: Stays at U of M, but no prelims

The state boys swimming and diving meet will be held at the University of Minnesota Aquatic Center, with modifications. Diving, which will be finals only, will be March 18 for both Class A and AA. The swimming portion for both classes will be held March 19-20, and feature two groups of four sections with finals only, no preliminaries.

The state Nordic and Alpine ski meets require the least amount of changes, as they are held outdoors. They’ll be at Giants Ridge in Biwabik. The Nordic ski meet will be held March 12, which is a month later than normal, and feature 88 boys and girls skiers. There will also be only one state qualifying team out of each section.

The state alpine ski meet will be held March 10 at Giants Ridge. There will be 88 boys and girls skiers, with pods of 22 skiers in a section. It will be a two-race event.

Current state guidelines allow for a maximum of 150 spectators at indoor events. The swimming and diving state meet will not have any spectators. Tickets will be $12 for any event at a high school venue, $16 for basketball and $19 for hockey, which applies to both adults and students.