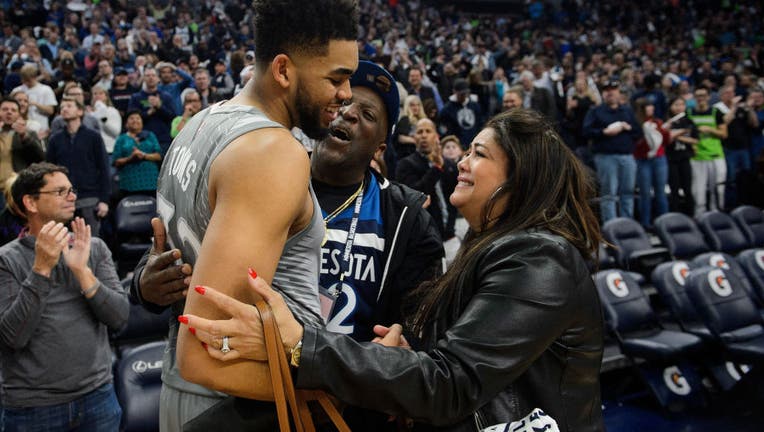 MINNEAPOLIS, MN - APRIL 11: Karl-Anthony Towns #32 of the Minnesota Timberwolves hugs his parents, Karl and Jackie Towns after winning the game against the Denver Nuggets of the game on April 11, 2018 at the Target Center in Minneapolis, Minnesota. T (Hannah Foslien / Getty Images)

MINNEAPOLIS (FOX 9) - While Sunday is a day of celebration for mothers across the nation, it is a holiday that's weighing heavily on many.

According to the team, Cruz passed away after the disease put her into the hospital and on a ventilator.

On Sunday, Towns remembered his mom, posting a touching tribute showing his mother at his side and supporting him through all the major moments in his career.

The video tribute is set to "A Song For Mama" by Boyz II Men.

In an Instagram story, Towns also shared a text message his mom sent him this past Christmas.

"My son, it seemed like I closed my eyes for just a moment and suddenly a man stood where a boy used to be," his mother wrote. "I may not carry you in my arms anymore but I always carry you in my heart. You are the sweetest present life has ever given me."

"Mom, miss you so much," Towns wrote in the story.