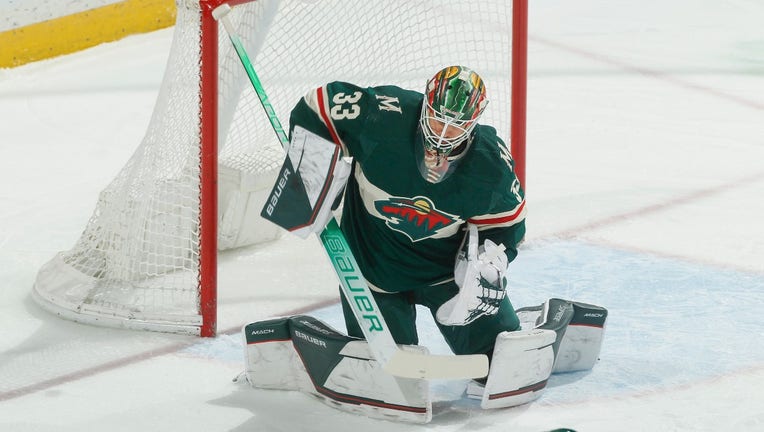 Cam Talbot #33 of the Minnesota Wild makes a save against the Calgary Flames during the game at the Xcel Energy Center on April 28, 2022 in Saint Paul, Minnesota.  ((Photo by Bruce Kluckhohn/NHLI via Getty Images))

MINNEAPOLIS - The Minnesota Wild faces elimination at the St. Louis Blues Thursday night in the Stanley Cup Playoffs, and it appears Dean Evason is making a change in net.

Cam Talbot is reportedly getting the starting goaltender duties over Marc-Andre Fleury. Talbot was the first goalie to leave the ice at the Wild’s morning skate on Thursday ahead of Game 6. According to Michael Russo with The Athletic, winger Marcus Foligno told reporters after skate that Talbot was getting the nod.

The Wild acquired Fleury, a three-time Stanley Cup champion, before the NHL trade deadline. In five playoff starts, Fleury has a 3.04 goals against average and a .906 save percentage.

Dean Evason hinted that changes might be coming before the team left for St. Louis on Wednesday, but wouldn’t divulge what they were. He didn’t confirm any changes at morning skate.

The Wild must win Thursday night to force a winner-take-all Game 7 at Xcel Energy Center. If they lose, their season is over after getting a franchise record 113 points during the regular season.