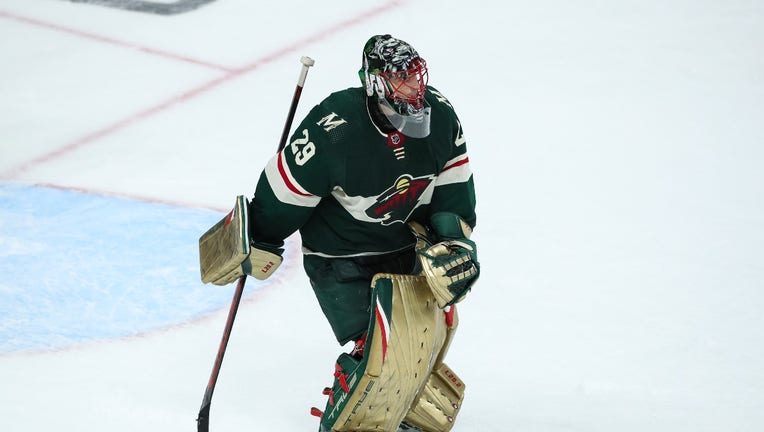 Marc-Andre Fleury #29 of the Minnesota Wild looks on after a 4-0 loss against the St. Louis Blues in Game One of the First Round of the 2022 Stanley Cup Playoffs at Xcel Energy Center on May 2, 2022 in St Paul, Minnesota. The Blues took a 1-0 series ((Photo by David Berding/Getty Images))

MINNEAPOLIS - Despite giving up four goals in a Game 1 loss to the St. Louis Blues Monday night at Xcel Energy Center, Marc-Andre Fleury is getting the Game 2 start.

Minnesota Wild coach Dean Evason made that decision official after morning skate on Tuesday. The Wild head into Game 2 needing a victory to salvage a split in the first two games of the best-of-seven series. They didn’t take advantage of having home ice in a 4-0 loss on Monday night.

After a 4-0 loss in first game of its playoff series against the St. Louis Blues, the Minnesota Wild say they aren’t worried yet and plan to remain focused on what got them where they are.

Fleury made 27 saves, but the Blues took advantage of rebound opportunities as David Perron netted a hat trick, all on second chances. Evason said they gave thought to starting Cam Talbot for Game 2, but opted to go with Fleury, who has won three Stanley Cups.

Talbot will sit despite going 13-0-3 over his last 16 starts with the Wild, and being steady all season before the team traded for Fleury.

"Easy decision, really. We debated going with Cam for sure, we talked about it. But there was no goals that were a direct result of Marc-Andre Fleury, that’s for sure," Evason said. "He made first saves on all of them I think, and had to make two or three after that. It’s on us as a team to clear those rebounds, get pucks away from the net and get people away from the net. You look at the 5-on-5 goal, there’s like seven mistakes before it gets to him so that’s on us."

It’s also on the Wild to score goals. They had 37 shots on goal Monday night, and at least 10 opportunities on the power play. They finished 0-for-6 on the man advantage, with the last power play being negated by a Kevin Fiala double minor for high-sticking.

Making his Stanley Cup Playoffs debut, Ville Husso stood tall for the Blues with a shutout. The Wild say they have moved on from Monday’s loss.

"You have to let it go. Tomorrow is a new game, for us it doesn’t matter if you lose 1-0 or 4-0. You have to erase it from your memory and look forward to the next one," defenseman Jared Spurgeon said.

Game 2 Tuesday night is set for another 8:30 p.m. puck drop, and the Wild know it’s a game they have to win. They can’t afford to go to St. Louis Friday night in an 0-2 hole, otherwise the talk starts of another early playoff exit.

The Wild hasn’t won a playoff series since beating the Blues in 2015. A win Tuesday night can certainly do a lot for their conference, and change the tone of the series.