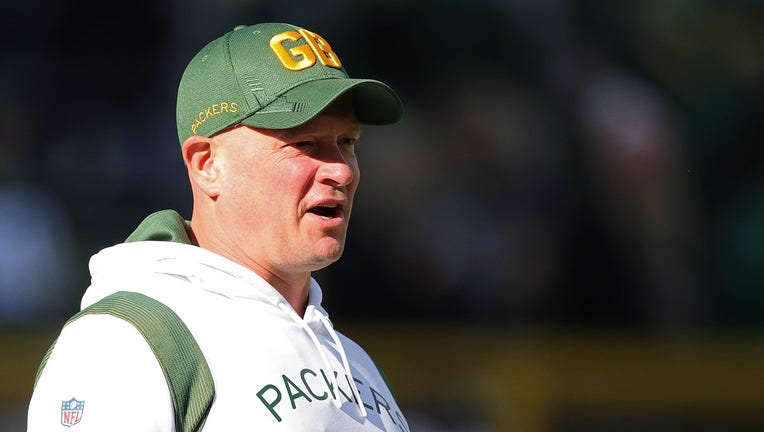 Offensive coordinator Nathaniel Hackett of the Green Bay Packers watches action prior to a game against the Washington Football Team at Lambeau Field on October 24, 2021 in Green Bay, Wisconsin.  ((Photo by Stacy Revere/Getty Images))

MINNEAPOLIS - It’s been less than a week since the Minnesota Vikings parted ways with Rick Spielman and Mike Zimmer, and the process to revamp the franchise is already underway.

Team officials announced on Sunday they conducted an initial interview with Monti Ossenfort for the general manager opening, and Nathaniel Hackett for the head coach opening. Ossenfort is currently the vice president of football operations for the Tennessee Titans, and he has local ties. He was a quarterback in college at the University of Minnesota-Morris, is a Luverne native and interned with the Vikings at training camp in 2001.

He spent 15 seasons with the Patriots before becoming the Titans’ director of player personnel in 2020.

Hackett is in his third season as the offensive coordinator with the Green Bay Packers. He interviewed with the Vikings Sunday, as the Packers are the No. 1 seed in the NFC Playoffs and have a first round bye. He’s in his 13th season as an NFL coach.

Before joining the Packers, Hackett was a quarterbacks coach and offensive coordinator with the Jacksonville Jaguars.

The Vikings have requested to interview eight candidates for the general manager opening, and as many as seven for the head coach. Owner and President Mark Wilf said last week the management team plans to hire a GM first, who will have a say in the head coaching position.

The Vikings went 72-56-1 under Zimmer, but won just two playoff games and made three NFC Playoff appearances in his eight seasons.