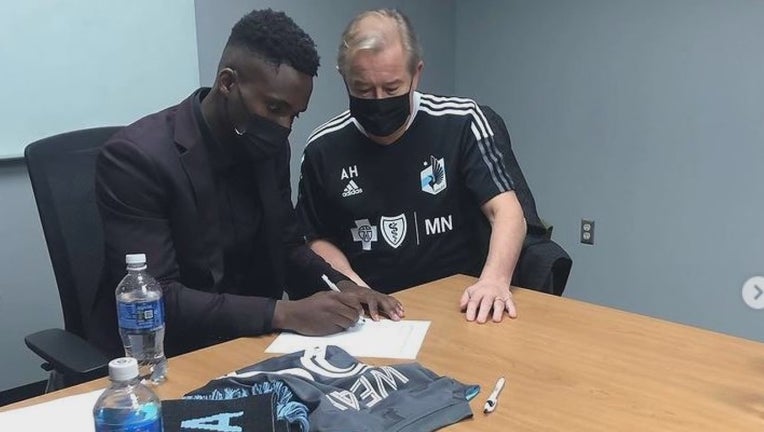 ST. PAUL, Minn. (FOX 9) - Patrick Weah, 17, is the newest member of the Minnesota United, but his path to becoming a pro athlete was unlike many who came before him.

"There was war, there were people dying on the streets, like killing," said Weah.

Weah was born in war-torn Liberia and lived there until 2011. His grandparents had won a lottery visa and eventually brought him along with his mother and two brothers to Minnesota. The violent memories from his youth linger from time to time, but there was always one thing that got him through it.

"When it was peaceful, just talking about soccer, all we did was play soccer religiously," said Weah.

He played it so well at Wayzata High School that the Loons took notice and the team says it’s excited to add yet another homegrown talent.

"When you have these signings like today, I think it just gives everyone excitement in a different way than maybe when you’re signing a first-team starter," said Manny Lagos, the Minnesota United chief soccer officer. "You’re really signing people that are from here that love the sport, love United and want to grow and start their pro career with us."

He’s only 17, but Weah says sets a high standard for his level of play.

"I didn’t come to this club to be a young kid that’s going to be like, of course I want to learn as much as possible, but I’m a competitor," he said.

Weah’s talent got him to where he is today, but he’s quick to credit those who made sacrifices to get him here, like his mother who worked tirelessly to put him in the best position to succeed and his father who remains in Liberia. Whenever Weah takes the field, he’s playing for more than just himself.

"Even when I’m doing conditioning, sprinting, like I feel tired and I feel down, I just think about my family," said Weah. "That’s my why. Why do I this? It’s for my family."