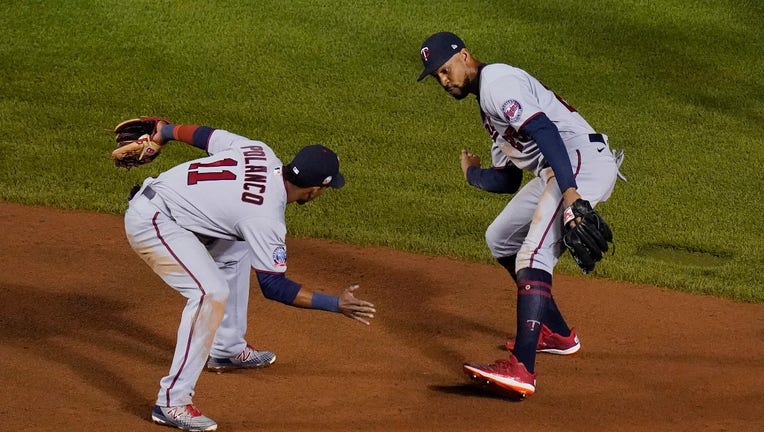 Jorge Polanco #11 and Byron Buxton #25 of the Minnesota Twins celebrate their team's 8-1 win over the Chicago Cubs at Wrigley Field on September 19, 2020 in Chicago, Illinois. ((Photo by Nuccio DiNuzzo/Getty Images))

MINNEAPOLIS - It’s Opening Day for Major League Baseball, and the Minnesota Twins are in Milwaukee for an afternoon game against the Brewers.

The Twins are coming off winning their second straight American League Central Division title, and Kenta Maeda will get the first start on the mount after finishing second in AL Cy Young Award voting last year. The Twins have released their lineup for Opening Day, and it should have fans excited.

"It’s a special day for us. We go down to Spring Training, put a lot into it, it’s a crazy time. There’s a lot happening, and the guys are getting ready. There’s real adrenaline. Opening Day, you have it," Twins manager Rocco Baldelli said in his pregame media session. "We’re here, the vibe is good. We’re just waiting for the first pitch to roll out there and to get to work."

Luis Arraez will lead off and play in left field. Josh Donaldson is batting second ant at third. Jorge Polanco will hit third and play at second, and Miguel Sano will hit clean-up and play first base.

Max Kepler is in right field and will hit fifth, Byron Buxton is in center field and hitting sixth. Mitch Garver will catch and hit seventh, and Andrelton Simmons will play shortstop and hit eighth. Since the Twins are in a National League ballpark and MLB does not have a universal designated hitter like last season, Maeda will bat ninth and slugger Nelson Cruz is on the bench.

Maeda turned some heads on Wednesday, hitting at least three home runs during his batting practice session in the team’s workout.