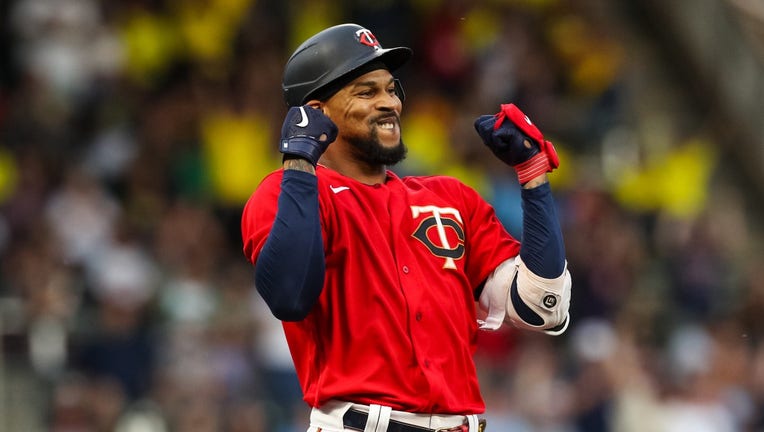 Byron Buxton #25 of the Minnesota Twins celebrates his triple against the Chicago White Sox in the third inning at Target Field on July 14, 2022 in Minneapolis, Minnesota.  ((Photo by David Berding/Getty Images))

MINNEAPOLIS - The Minnesota Twins have a pair of first-time All-Stars in center fielder Byron Buxton and infielder Luis Arraez.

On Sunday, in the middle of an 11-0 loss to the Chicago White Sox at Target Field, the Twins learned Buxton would be starting in the mid-summer classic Tuesday night. It became official as the public address announcer informed fans in the final game before the All-Star break.

He's getting the start after Los Angeles Angels of Anaheim star Mike Trout pulled out of the game. He’s been dealing with back spasms for the last week. American League manager Dusty Baker said Buxton will hit sixth Tuesday night.

"Very few of us, if any of us, get a chance to do something like that," Twins manager Rocco Baldelli told reporters Sunday. "That's about as good as it gets and about as great an honor as you're going to get."

Buxton enters his first All-Star Game hitting .216 with a team-high 23 home runs, 11 doubles, three triples and 43 RBI in 73 games. He will not be competing in Monday night’s Home Run Derby, instead resting as he’s battled a knee injury through the first half of the season that’s kept him out 21 games.

Buxton is the first Twins' outfielder to start in an All-Star Game since Torii Hunter in 2002. In that game, Hunter robbed Barry Bonds of a home run.

"I hope every ball gets hit to me. That sounds so selfish, but my little saying that we got with us is no balls fall but rain drops. Anything hit in the outfield, I don’t want it touching the ground," Buxton said.

Arraez has been arguably the Twins’ best player through the first 94 games. He’s leading the AL with a .338 batting average, and has 16 doubles, five homers and 30 RBI in 84 games. He’s played much of the season at first base as Miguel Sano works his way back from a torn meniscus.

The Twins are 50-44 at the All-Star break and have a two-game lead over the Cleveland Guardians in the American League Central Division. They’re three up on the White Sox after losing three of four to Chicago, with a chance to put them away. Instead, the Twins limped into the break losing two of three at Texas, splitting two games with the Brewers and losing three to the White Sox.

They’ve lost seven of their last 10 games, and now the remainder of the summer will be a three-horse race between the Twins, Guardians and White Sox for the AL Central.

"We're not happy about this series. There's no way we're going to sit here and speak glowingly about the way we just played," Baldelli said. "That being said, I think it was a first half that was mostly good baseball. But we do have work to do. Everywhere we look, we have work to do. We're nowhere near as good as we need to be right now."