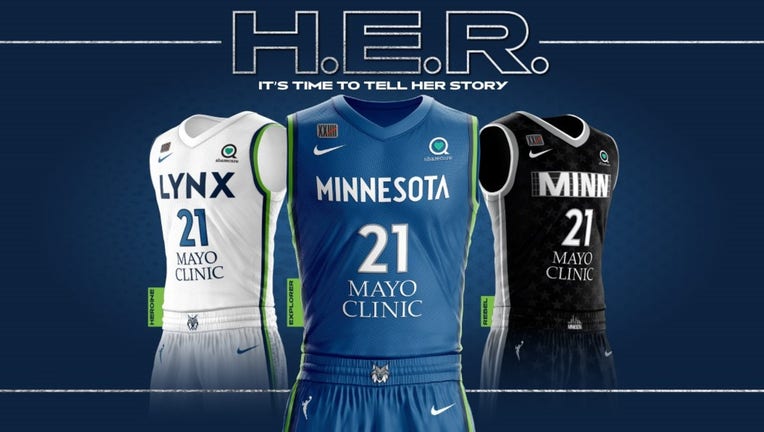 MINNEAPOLIS - The Minnesota Lynx will have a new look for the 2021 WNBA season, and it’s not just about the new talent Cheryl Reeve added in the offseason.

The Lynx on Thursday unveiled their new uniforms for the 2021 season. They will have three separate jerseys, designed by Nike, that recognize players as Heroines, Explorers and Rebels.

The WNBA in March launched a 25th anniversary logo, as part of Women’s History Month, that includes new uniforms that will rotate throughout the season and pay tribute to each team’s community attributes.

"Each uniform embodies player and team characteristics – attitude, potential, power, and honors not only our fans, but our community as well. We’re excited to welcome back our fans at Target Center and look forward to seeing many of you in our new uniforms as well," said Carley Knox, the Lynx president of business operations, in a statement.

The Lynx’s Heroine edition uniform highlights the courageous nature to battle adversity and fight for what’s right. The Explorer edition jersey highlights the spirit of the Lynx, as they aim to create a legacy in basketball and new paths for change. It represents having a relentless fire to hunt for what’s next. The Rebel edition jersey, inspired by First Avenue, highlights an unapologetic and disruptive spirit of the Lynx.

A portion of proceeds from the Rebel T-shirt will benefit the Twin Cities Music Community Trust, a nonprofit that supports out of work artists and entertainers impacted by the COVID-19 pandemic.

Mayo Clinic is the lead sponsor on the Lynx jersey for the seventh straight year. The Lynx also have Sharecenter, a health and wellness platform, as a jersey patch.

It should be an exciting 2021 season for the Lynx, which have added guard Kayla McBride, guard/forward Aerial Powers and forward Natalie Achonwa to a roster that already includes Napheesa Collier, reigning WNBA Rookie of the Year Crystal Dangerfield and future Hall-of-Famer Sylvia Fowles.