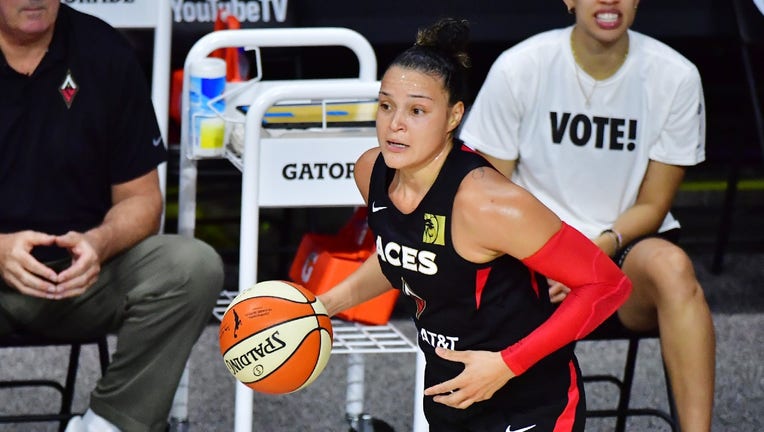 Kayla McBride #21 of the Las Vegas Aces dribbles during the first half of Game 3 of the WNBA Finals against the Seattle Storm at Feld Entertainment Center on October 06, 2020 in Palmetto, Florida. ((Photo by Julio Aguilar/Getty Images))

McBride is a three-time WNBA All-Star and comes to the Lynx after spending seven seasons with San Antonio and Las Vegas. She helped lead the Aces to last year’s WNBA Finals, averaging 12.5 points, 2.3 rebounds and 2.4 assists per game last season.

In 197 career games, McBride is averaging 14.7 points, 3.4 rebounds and 2.4 assists per game while shooting nearly 37 percent from the perimeter, and nearly 90 percent from the free-throw line.

"We are very excited to welcome Kayla to the Minnesota Lynx family," Lynx coach and general manager Cheryl Reeve said. "She is a fierce competitor with a will to win and we look forward to having her in a Lynx uniform this season and beyond."

McBride will join a backcourt in Minnesota that already includes last year’s WNBA Rookie of the Year in Crystal Dangerfield, veteran Odyssey Sims, Rachel Banham and Lexie Brown. McBride comes to an organization that’s been to the WNBA Playoffs in 10 straight seasons, and won four championships.

"Being in Minnesota is something I am so hyped about," McBride said. "The city, the fans and the organization have all been something I have admired for so long. Coach Reeve and her staff believe in me to be a part of the special atmosphere they have here and I am extremely excited to become a part of it."

McBride was the No. 3 overall pick by the San Antonio Stars in 2014. She helped lead Notre Dame to the CAA women’s title game three times, and was the ACC Player of the Year in 2014.

The Lynx also announced Monday they’ve signed former Indiana Fever forward Natalie Achonwa. She was the No. 9 overall pick in 2014, and named to the All-WNBA Rookie Team. In 169 career games, she’s averaging 7.7 points and 4.5 rebounds per game, shooting better than 52 percent from the field.