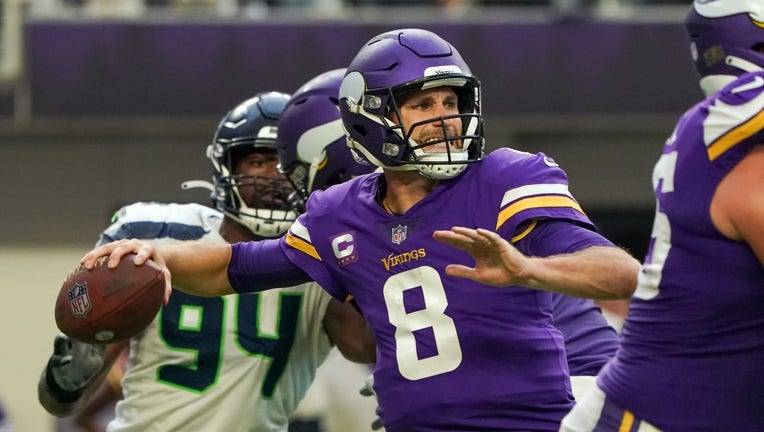 MINNEAPOLIS - The Minnesota Vikings finish the 2021-22 season against the Chicago Bears on Sunday at U.S. Bank Stadium, and Mike Zimmer says Kirk Cousins will be the starting quarterback.

Cousins missed the Vikings’ 37-10 loss to the Green Bay Packers Sunday night at Lambeau Field after being placed on the reserve/COVID-19 list. Cousins was activated from the list on Wednesday, and said he had mild symptoms. He watched the loss to Green Bay at home, with his play sheet in front of him.

In Cousins’ absence, Sean Mannion threw for 189 yards and a touchdown to KJ Osborn. Mannion also led the Vikings in rushing, with two attempts for 14 yards. Cousins became one of more than 30 Vikings’ players to test positive for the virus this season.

Zimmer’s greatest fear, not having his starting quarterback available with a potential playoff spot on the line, became a reality against the Packers.

The Minnesota Vikings finish the 2021-22 season against the Chicago Bears on Sunday at U.S. Bank Stadium, and Mike Zimmer says Kirk Cousins will be the starting quarterback.

"It’s the world we’re living in. Most teams have had to deal with it in some way, shape or form, Cousins said. "I’m proud of the way our organization has fought through it, and adapted as needed."

Cousins, who has followed protocols for non-vaccinated players all season, was back at TCO Performance Center Wednesday morning. He had to be away from the team for a minimum of five days, as the NFL had a recent change in protocols.

In 15 games this season, Cousins is completing 66 percent of his passes for 3,971 yards, 30 touchdowns and seven interceptions. Dalvin Cook said he was happy to have Cousins back.

Cousins faced public criticism back during training camp for missing a night practice at TCO Stadium. He was considered a high-risk close contact after rookie Kellen Mond tested positive. He wouldn’t disclose his vaccination status upon returning, but his comments about protocols made his decision on the vaccine clear. At the time, the Vikings were among the lowest-vaccinated teams among players in the NFL.

Cousins was asked Wednesday about how he handles that scrutiny, and missing the Packers’ game. The Vikings have had players, both vaccinated and not, miss games due to COVID-19. A week before the Packers’ game, Mannion, who is vaccinated, tested positive and Mond had to be the back-up quarterback.

"In my instance it wouldn’t have mattered just because I had mild symptoms. They don’t want you playing the game with COVID. I would’ve tested positive regardless, so in my case it didn’t make a big difference," Cousins said.

The Vikings on Monday placed five starters on the reserve/COVID-19 list, including Eric Kendricks and offensive linemen Ezra Cleveland, Christian Darrisaw and Brian O’Neill. Safety Cam Bynum also went on the COVID-19 list. Zimmer said all five should be back against the Bears, assuming they clear COVID-19 protocols.

Zimmer said all starters who are healthy and available will play in the regular season finale.

The Vikings will miss the NFC Playoffs for the second straight season under Zimmer, which has never happened in his eight seasons. It’ll also be the third time in four years, and fifth time in eight years missing the playoffs.

The 2021 season marks the fourth for Cousins as the Vikings’ starter. The team has just one playoff appearance, and one playoff win, over that time. Cousins was asked about his future in Minnesota, as he’s due to make $45 million next season.

"I’m just focused on the Bears on Sunday. I certainly want to be a Minnesota Viking for the rest of my career," Cousins said.