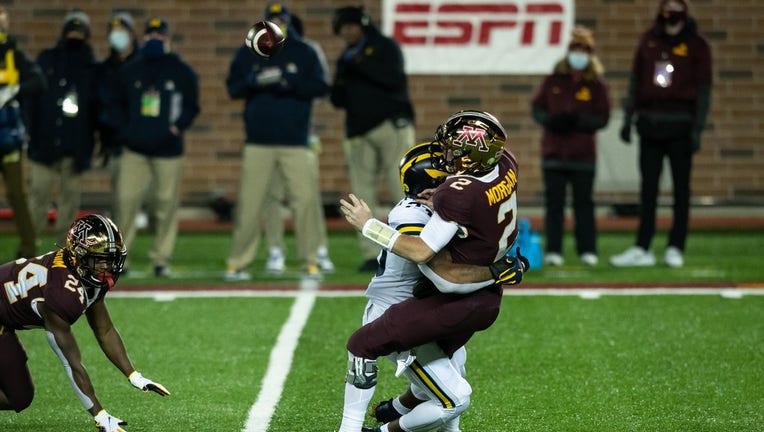 Tanner Morgan #2 of the Minnesota Golden Gophers fumbles the ball after getting hit by Michael Barrett #23 of the Michigan Wolverines in the first quarter of the game at TCF Bank Stadium on October 24, 2020 in Minneapolis, Minnesota. ((Photo by David Berding/Getty Images))

MINNEAPOLIS - The University of Minnesota football team faced adversity head-on just to play football in 2020. Things aren’t going to get any easier for the Gophers after a 49-24 loss to No. 18-ranked Michigan Saturday night at TCF Bank Stadium.

The only fans in the building were family of players for both teams due to the COVID-19 pandemic. Between injuries and possible COVID-19 issues, Minnesota was without offensive linemen Daniel Fa'alele, Curtis Dunlap Jr., kickers Michael Lantz and Grant Ryerse, punter Mark Crawford, linebacker Braelin Oliver, defensive back Phillip Howard and specialist Dragan Kesich.

Excitement for the Gophers rose to a new level after an 11-2 season in 2019. College GameDay was in town for the second straight home game, but the Little Brown Jug is headed back to Ann Arbor. Minnesota hasn’t beaten Michigan since 2014, and it hasn’t beaten the Wolverines at home since 1977. The Gophers have lost 17 straight home games to Michigan, and P.J. Fleck is now 2-7 in trophy games.

The Gophers lost seven starters on defense from last season, four to the NFL. Michigan took full advantage, rushing for 256 of its 481 total yards and scoring on five of its seven possessions in the first half. Hassan Haskins led the Wolverines’ rushing attack with six carries for 82 yards and two scores, Zach Charbonett added a 70-yard touchdown run and in his first start, quarterback Joe Milton had 277 total yards and two scores.

Michigan averaged 8.6 yards per carry on the night.

“Defensively we know we’re much better than what we showed tonight. Communication, guys doing their jobs wasn’t where it needed to be tonight. The how is there, the want was there. Now we’ve just got to execute,” linebacker Mariano Sori-Marin said. We’re not going to let this define our season."

Minnesota took the early lead after blocking a Michigan punt on the first possession of the season. Tanner Morgan followed with a 14-yard touchdown pass to Ko Kieft for a 7-0 lead.

Michigan answered one play later, on Charbonnet’s 70-yard touchdown run. The Wolverines took the lead on Minnesota’s next offensive series, and never gave it back the rest of the night. Morgan was sacked by Michael Barrett, fumbled and it landed in the chest of Donovan Jeter, who took it 15 yards for the touchdown.

Brock Walker, the lone available kicker and coming off a recent sports hernia surgery, made a field goal to get the Gophers within 14-10. Without another kicker, the Gophers opted for short kickoffs most of the night. The Wolverines ran the ensuing kickoff back 66 yards, and took a 21-10 lead after Milton hit Mason for a 9-yard touchdown.

Mo Ibrahim scored from 16 yards out to get Minnesota within 21-17, but Michigan answered again as Haskins scored from three yards out. Down two his back-up punter, Fleck tried a fake punt on their next possession, but it went nowhere. Haskins turned it into a touchdown, and the Wolverines led 35-17 at half.

Fleck said after it’s a great call if it works, and a horrible call if it doesn’t. Without healthy specialists, he had to take a chance.

“It’s a difficult challenge, but everybody has challenges in 2020. I didn’t handle the challenges well enough, simple as that,” Fleck said.

Ibrahim scored his second touchdown of the night to get Minnesota within 35-24 in the third quarter. But every time the Gophers got within striking distance, the Wolverines answered. Milton scored from two yards out to give Michigan a 42-24 lead in the third quarter, and on the ensuing possession, Morgan overthrew an open Ibrahim for what would’ve been a touchdown on 4th and goal.

Morgan finished the night 18-of-31 for 197 yards, a touchdown, a lost fumble and an interception.

“It’s one game. The sky hasn’t fallen on the season or anything, we don’t look at it like that. It’s one game, we’ve got to be better, we will be better,” Morgan said.

Chris Evans scored from 5 yards out to put the game away, giving Michigan a 49-24 lead with 13:51 left. Without Fa’alele and Dunlap, the Gophers ran for just 129 yards, averaged only 4.5 yards per play, 3.1 yards per carry and Morgan was sacked five times. The Wolverines also finished with eight tackles for a loss.

Minnesota heads to Maryland next Friday night. The Terrapins lost to Northwestern 43-3 on Saturday. The Gophers will watch film, and move on.

“My message to them in the locker room is a loss to Michigan, and the way it was, could be the best thing that happened to us in 2020. We’ve got a lot to learn, and we did it against one of the best teams in America,” Fleck said.