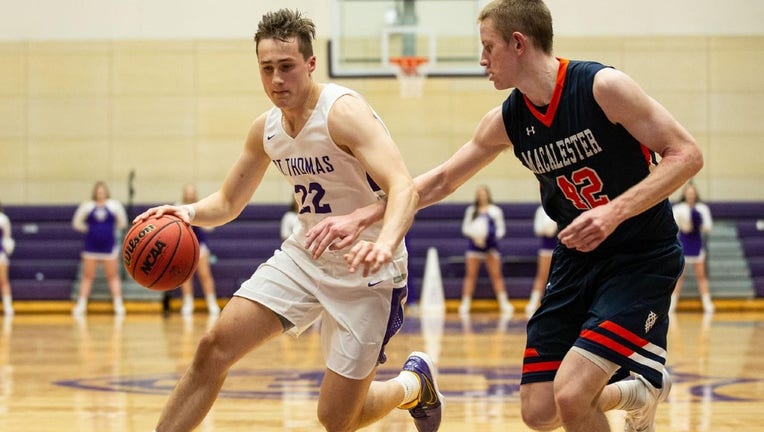 The MIAC announced on Wednesday plans to have winter and spring sports in 2021 modified due to the COVID-19 pandemic. ((credit: University of St. Thomas Athletics))

MINNEAPOLIS - Presidents in the Minnesota Intercollegiate Athletic Conference on Wednesday approved plans to go ahead with spring sports, and fall sports that had been postponed due to the COVID-19 pandemic.

League officials say teams can officially start competing as early as Friday. MIAC officials say they are planning for a full spring sports season with conference championships in baseball, softball, tennis, golf and outdoor track and field. Sports postponed in the fall that will compete this spring include soccer and volleyball in a condensed schedule, while cross country and football teams can schedule up to four games or meets.

There will not be conference championships for fall sports in the spring. It’s up to each MIAC institution if they’ll participate in sports this spring.

According to state health guidelines, fall and spring sports teams will wear face coverings during all practices and events. The rule also applies to any non-conference teams traveling to play a MIAC team. The MIAC will also follow NCAA guidelines for COVI-19 testing. No fans will be allowed at any indoor events, and each school will have its own policy for fans at outdoor events.

Here’s how each sport will look:

The MIAC baseball season will feature a 12-round conference season starting Friday, with midweek and Saturday doubleheaders, and single games on Sundays that will go nine games. Teams can start playing non-conference games as early as Friday. The MIAC Baseball Playoffs will back one week to May 19-22, with the NCAA Tournament moving back one week. The team with the best conference winning percentage that has played at least 51 percent of its schedule will be the regular season champion and No. 1 seed for the playoffs. Teams 2-11 in the league will play a best-of-three series in round 12, with the winners advancing to the playoffs.

The MIAC softball season will start with conference doubleheaders as early as April 3. The MIAC Playoffs will shift back on week to May 13-16, and will feature six teams. The first round of the playoffs will feature a single-elimination play-in format, followed by a standard four-team double elimination tournament over three days.

The MIAC will have men’s and women’s golf back this spring after both were postponed in the fall due to COVID-19 concerns. The 2021 MIAC Championships will be held April 30-May2 at Emerald Greens in Hastings.

The MIAC outdoor track and field season for men’s and women’s teams will start competition as weather allows in Minnesota. The MIAC Multi-Event Championships are set for May 7-8, and the full conference championships will be held May 14-15. Hosts for the events have not yet been determined.

Competition for MIAC men’s and women’s teams can start as early as Friday and continue through May 15. Teams can schedule meets at their own discretion, and they’re allowed up to four competitions. All athletes must wear masks during competition, and there will not be a conference championship meet.

The MIAC football season will be held at the discretion of each school in the league, the season will range between March 5 and May 15. There is not an official conference schedule for football, and there won’t be a conference champion in the spring. Participating teams are allowed up to four games, exhibitions or scrimmages.

The men’s and women’s soccer seasons will start as early as Friday and run through May 15. Teams are allowed up to eight games, with men’s teams playing five MIAC games and women’s teams playing six. Conference games will start April 6 for women, and April 8 for men. Any MIAC team can opt out of the season, and opponents have the option to find replacement teams. There will not be a conference champion.

The volleyball season will run March 5-May 15. Competing teams are allowed up to nine matches, including a six match conference slate scheduled to start March 31. Matches will be played on Wednesday nights. There will not be a conference champion.

The MIAC will not have conference champions in hockey or basketball. Student athletes can also compete in their sports without losing a year of college eligibility.