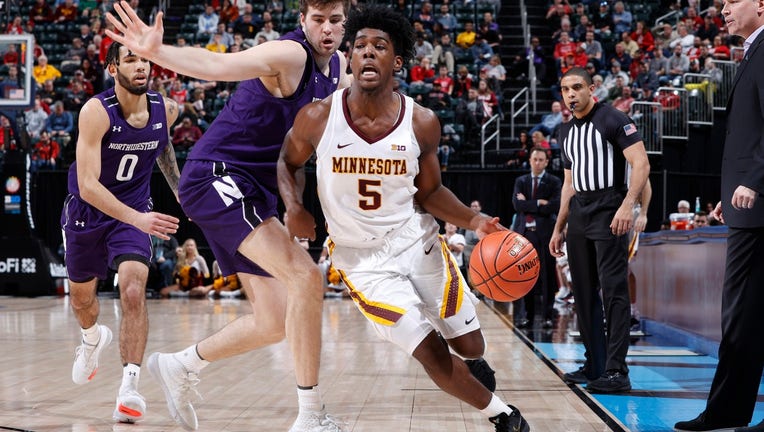 Marcus Carr #5 of the Minnesota Golden Gophers drives against Robbie Beran #31 of the Northwestern Wildcats in the first half during the first round of the Big Ten Men's Basketball Tournament at Bankers Life Fieldhouse on March 11, 2020 in Indianapol ((Photo by Joe Robbins/Getty Images))

MINNEAPOLIS - University of Minnesota redshirt sophomore guard Marcus Carr announced Monday night he’s declaring for the 2020 NBA Draft, but is leaving the option open to return to school next fall.

Carr posted on Instagram Monday night he's going to go through the draft process but won’t sign with an agent, which allows him to remain eligible for the 2020-21 season if he chooses to return to the Gophers. Carr was Minnesota’s second-leading scorer last season at 15.4 points per game.

He started all 31 games, and led the Big Ten with 36.8 minutes per game. Carr shot 39.3 percent from the field, including 36.1 percent from the perimeter. He also averaged 6.7 assists per game and set the single-season assist record with 207 this year.

Carr scored in double figures in all but six games this season, and had a career-high 35 points on 12-of-17 shooting from the field in Minnesota’s 84-71 win over Ohio State to open Big Ten play at Williams Arena this year.

Carr was named Third Team All-Big Ten this season. He has until June 3 to decide if he’s staying in the NBA Draft process, or returning to school for his junior season.

Carr joins teammate Daniel Oturu, who declared for the NBA Draft last week. Oturu intends to hire an agent and stay in the draft process, which would end his time with the Gophers after two seasons.