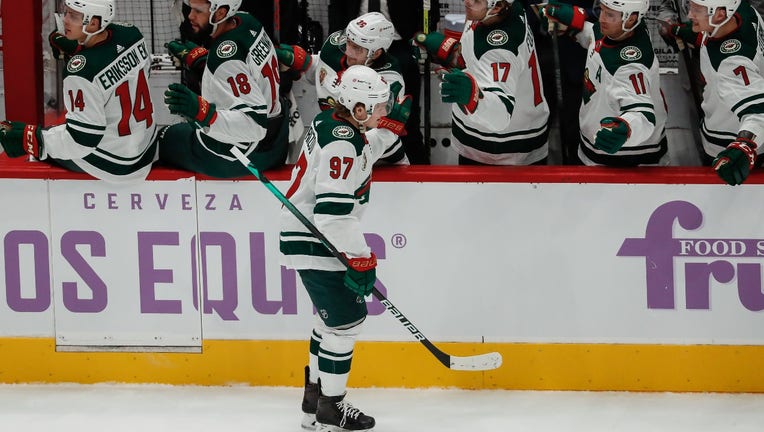 Minnesota Wild left wing Kirill Kaprizov (97) celebrates a goal with teammates during the NHL hockey game between the Minnesota Wild and the Arizona Coyotes on April 19, 2021 at Gila River Arena in Glendale, Arizona. ((Photo by Kevin Abele/Icon Sportswire via Getty Images))

MINNEAPOLIS - The Minnesota Wild appears to be hitting its stride as the National Hockey League regular season comes to a close, and behind a rookie having a historic season, there won’t be a sweat for the Stanley Cup Playoffs with 12 regular season games remaining.

The Wild beat the Arizona Coyotes 5-2 Monday night, pulling away after Arizona scored to cut the deficit to 3-2 early in the third period. The Wild thought it had a goal to take a 4-1 lead, but it was taken away on a call for goaltender interference. Leading 3-2 in the third period, the Wild got goals from Kevin Fiala and an empty-netter from Jonas Brodin to seal the team’s fourth straight win.

Dean Evason said after the win the Wild is taking it one day at a time, and they haven’t wavered from that approach all season.

That said, they’re playing their best hockey at the right time. The Wild is 7-2-1 in its last 10 games, and now they’re getting ready to make a playoff run instead of fighting to get in.

"We want to go into the playoffs moving in the right direction, confident in our game. I think that’s our focus right now, just continuing to build on what we have going," said Jordan Greenway, who had a goal in Monday night’s win.

The Wild also has a budding star in Kirill Kaprizov, who made franchise history with a power play goal in the first period. Kaprizov set a record for points by a rookie with 37, passing Marian Gaborik. He also tied Gaborik’s mark for goals by a rookie with 18.

There’s still 12 games to play for Kaprizov to improve on both of those marks.

"He’s alright, eh? I just think it’s great to see it play out the way it has so far. Great guy in the room, awesome on the ice. We’re happy to have a player like that on our team, that’s for sure," Marcus Foligno said.

The Wild is getting contributions from up and down the lineup, the power play is on fire after a slow start and their getting solid goaltending from Kaapo Kahkonen and Cam Talbot. They’ve got veteran leaders, and skilled young players.

It seems like the recipe to make a run in the playoffs, but there’s still 12 games to play to get there.