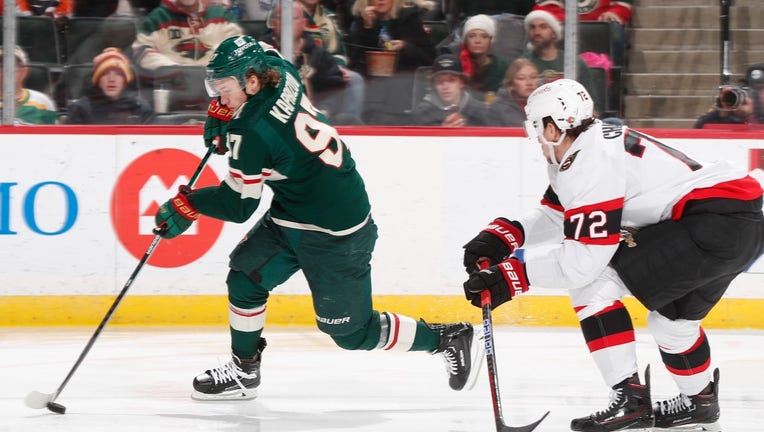 Kirill Kaprizov #97 of the Minnesota Wild gets an assist for his 200th career NHL point with Thomas Chabot #72 of the Ottawa Senators defending during the game at the Xcel Energy Center on December 18, 2022 in Saint Paul, Minnesota.  ((Photo by Bruce Kluckhohn/NHLI via Getty Images))

MINNEAPOLIS - Kirill Kaprizov made history on Sunday as the Minnesota Wild beat the Ottawa Senators 4-2 at Xcel Energy Center.

Kaprizov had a goal and two assists, and notched his 200th career point as the Wild won its fifth straight game and improved to 18-11-2 on the season. He’s the 23rd player in NHL history to collect 200 career points in 167 games or less.

"To be honest, you guys won't let me forget how many goals I get or not," Kaprizov told reporters through a translator after Sunday’s win. "To me, obviously the most important thing is wins over losses. "It's my job to go out there and play and do the best that I can, and for you guys to make those comparisons and assumptions."

He’s also the fourth player in league history to get to 200 points in 167 games or fewer since the start of the 2000-01 season. That group includes Sidney Crosby, Alex Ovechkin and Evgeni Malkin. Crosby did it in 142 games, Ovechkin did it in 165 and Malkin 166.

Kaprizov is the fifth-fastest left win in the history of the NHL to reach 200 career points, and the fastest in Wild franchise history to get there, beating Marion Gaborik’s 290 games. Kaprizov now has 201 points, including 93 goals, in 167 career games.

Sunday’s win caps a four-game sweep for their latest home stand, with the wins coming by a combined 14-5 margin. The Wild has also won seven straight at home, and is fifth in the Western Conference at 38 points through 31 games.

They’re just seven points out of the top spot in the West, and head to the West Coast this week to face Anaheim Wednesday night and San Jose Thursday night.