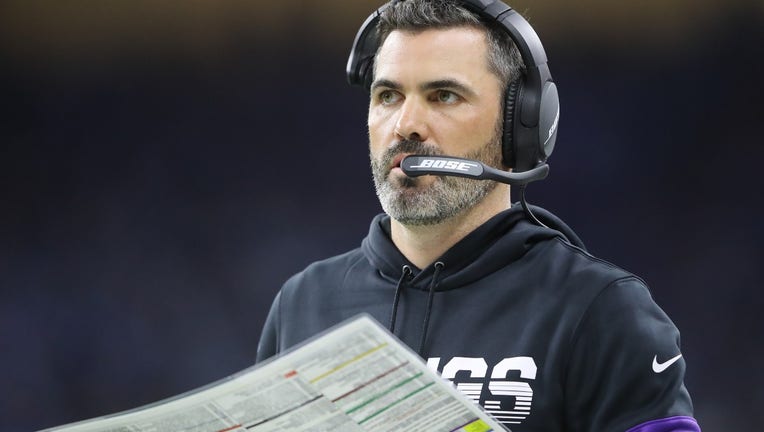 Minnesota Vikings offensive coordinator Kevin Stefanski looks on in the fourth quarter during a game against the Detroit Lions at Ford Field on October 20, 2019 in Detroit, Michigan. ((Photo by Rey Del Rio/Getty Images))

MINNEAPOLIS - The Minnesota Vikings faced a harsh reality as they cleaned out their lockers at TCO Performance Center on Sunday: Their season is over, and now management has to look for a new offensive coordinator.

The Cleveland Browns have not made the announcement official, but Vikings players were told in a team meeting that Kevin Stefanski is leaving the Vikings to be the Browns’ next head coach. Stefanski was a finalist for the position last year, before Cleveland opted to go with Freddie Kitchens.

Kitchens was fired after just one season, with the Browns finishing 6-10. Stefanski interviewed for the job on Thursday, before the Vikings lost at San Francisco Saturday 27-10 in the NFC Divisional Playoffs.

“It’s the NFL,” said wide receiver Adam Thielen, who added that Stefanski’s demeanor as a leader is what stuck out to him the most. “Through the good times, through the bad times, he’s the same guy. He’s not going to throw anybody under the bus. He’s going to take ownership and do whatever it takes to put you in the best position.”

Stefanski, 37, spent 14 seasons with the Vikings in a variety of offensive coaching roles. The Vikings are now in search of their fifth offensive coordinator in five seasons. Stefanski took over near the end of last season, after Mike Zimmer fired John DeFilippo.

Stefanski had the interim label removed in the offseason, and worked closely on the team’s zone blocking scheme in the run game with offensive advisor Gary Kubiak.

“It’ll be interesting, he’ll be a tough one to replace. He’s a really good guy and I wish him luck with everything he’s doing,” said rookie receiver Bisi Johnson, who finished his first NFL season with 31 catches for 294 yards and three touchdowns.

Zimmer picked Stefanski as his guy after last season to establish the Vikings’ identity on offense. They were going to be physical at the point of attack, and they were going to run the football to open up the rest of the offense.

When they were fully healthy, it worked for the most part. Dalvin Cook led the NFL in rushing halfway through the season before being sidelined with chest and shoulder issues. He was also the team’s second-leading receiver. The Vikings finished the regular season 16th in total offense and sixth in rushing, after being one of the worst rushing offenses in the NFL last year.

One of the key pieces in executing the run game arrived in the NFL Draft, in the form of N.C. State center and No. 18 overall pick Garrett Bradbury. For the rookie, losing Stefanski is bittersweet.

“It’s tough, but that’s the business. Promotions are going to happen. Part of me wants him to stay here, but part of me is so happy for him and his family. I couldn’t have asked for a better offensive coordinator this first year,” Bradbury said. “He’s awesome for a lot of reasons. Cleveland is getting a hell of a coach, a hell of a person.”

The Vikings struggled Saturday in Stefanski’s final game against the No. 1 defense in the NFC. They managed just 147 total yards, 21 rushing yards, seven first downs and one touchdown.

So who could be the next newest offensive coordinator? The early popular names being thrown out there are Kubiak, who worked hand-in-hand with Stefanski this season. There’s also his son, Klint Kubiak, the Vikings’ quarterbacks coach. There’s even a few whispers the Vikings could try to bring back Pat Shurmur, who was fired as New York Giants head coach after a 4-12 season.