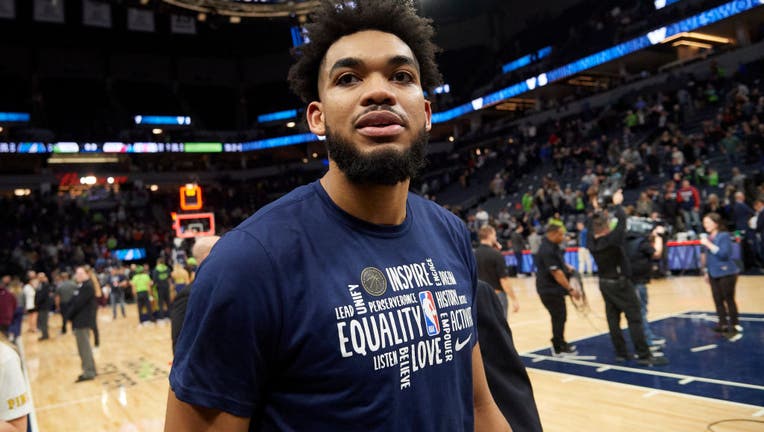 MINNEAPOLIS - The Minnesota Timberwolves hosted Media Day on Monday at Mayo Clinic Square, less than a week after the latest big shakeup within the franchise.

They introduced limited partners Alex Rodriguez and Marc Lore, who will eventually take over ownership duties from Glen Taylor. Taylor, 80, who has owned the franchise since 1994, started the day by telling media he wouldn’t talk about the firing of Gersson Rosas. He also wouldn’t comment on players under contract on other rosters, with speculation that the Wolves are working to trade for Philadelphia 76ers star Ben Simmons.

Timberwolves’ players spoke in the afternoon, and Karl-Anthony towns took the microphone to speak about his time in Minnesota as he enters his seventh season. Rosas was fired last Wednesday after about two years as the front office head, a stretch in which the team went 42-94. Rosas fired Ryan Saunders, and replaced him with Chris Finch.

It’s also been reported that Rosas was having an inappropriate relationship with another member of the front office, who is also no longer working for the franchise. Towns was asked about the instability in the organization on Monday, now that Sachin Gupta has been named to replace Rosas.

Towns tweeted "wtf…" when he learned of the decision to dismiss Rosas. D’Angelo Russell said he was on the golf course when he found out, and just shrugged it off.

"You’re right, it’s been something that’s been very constant with my career here in Minnesota. At the end of the day, I have to continue being a professional. Being transparent, what happened last week, just add it to the list. It’s just the same thing every single time," Towns said. "I joked about it the day before, like man it’s been a real quiet offseason for Minnesota. That’s very different. Boom, made sure they had one left in the hat."

Towns has been through a lot in six seasons with the Timberwolves. He was drafted by Flip Saunders, who eventually lost a battle with cancer. He lost his mother, and several other family members, to COVID-19 in 2020. He’s had injuries, he dealt with his own COVID-19 battle last year and there was drama with Jimmy Butler before the team eventually traded Butler.

"I’ve been through everything. Death of a head coach who gave me this ability and this chance to play for Minnesota, and I’m forever grateful to the Saunders’ family. I’ve been through numerous front offices, I’ve been through numerous regimes while being blessed with having so many great teammates to play with. I also didn’t have a chance to really build any true relationships with anybody because always instability, always change," Towns said. "I’ve been through a lot, COVID, I’ve been everything from defamed by teammates, been a scapegoat for people, COVID, my own personal life. (Expletive) hasn’t been easy since I came here, but the only thing that’s constant is me being a consummate professional in all that."

The Wolves have made one playoff appearance since 2004, when Kevin Garnett led the franchise to the Western Conference Finals. Towns and Butler were teammates in the 2017-18 season, and it was a 4-1 first round loss to the Houston Rockets.

We’ll find out soon enough if the new regime of Finch, Gupta, Rodriguez and Lore, meshed with the talent of Towns, Russell, Anthony Edwards and Malik Beasley is enough for the Wolves to get rid of their tumultuous past, largely at the hands of Taylor.