(FOX 9) - Back from Miami after a comeback win against the Heat, the Minnesota Timberwolves beat the San Antonio Spurs 149-139 on a night that saw two franchise records broken.

Karl-Anthony Towns led the Timberwolves in scoring by a large margin, setting a new franchise record with 60 points scored in a game (to go with 17 rebounds). In 2018, Towns last scored a franchise record 56 points against the Atlanta Hawks. Towns scored 32 of his 60 points in the third quarter. He's the first center in the NBA to have a 60-point game since Shaquille O'Neill did it on March 6, 2000.

Towns got a water bottle shower from his teammates both on the court and in the locker room after the win.

"I was telling them in there this happens because of y’all. None of this happens without my teammates saying ‘Hey, we want you to have a chance at history.’ They have to pass me the ball, so for them to all be on the same page about we want to get Karl his moment and give him a chance, it speaks volumes about the chemistry of this team," Towns said.

D’Angelo Russell finished with 19 points and Pat Beverley scored 20 as the team set a new franchise record for points scored in a game. Fittingly, it was Towns that hit the three-pointer to give the team the new record. He finished 7-of-11 from the perimeter in the win.

The Timberwolves started the game scoring fluidly with Russell shooting six-for-six in the first quarter as the offense was flowing, but the Spurs wouldn’t be far behind as Minnesota went into the half holding only a 75-73 lead. The game would change at that point and it would be all about All-Star Towns, as the Timberwolves continued to find their rhythm and exploded offensively to run away with the win. 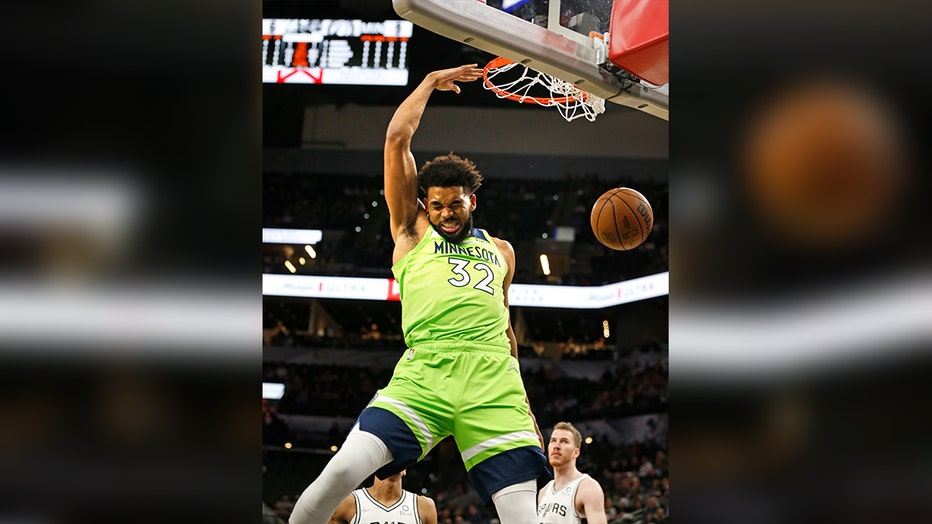 Karl-Anthony Towns #32 of the Minnesota Timberwolves dunks against the San Antonio Spurs in the first half at AT&T Center on March 14, 2022 in San Antonio, Texas. (Photo by Ronald Cortes/Getty Images)

Towns was actually on the bench waiting to come in during the fourth quarter, when the Spurs put their reserves in the game. He turned to coach Chris Finch, wondering what to do as he closed in on the franchise record.

The Timberwolves needed every point from Towns to get their 40th win of the season. They're one win away from guaranteeing themselves at least a .500 season, and it's just the second time since their 2004 run to the Western Conference Finals that they've won at least 40 games in a regular season. It was Towns' night to be dominant.

"I feel any time I touch the ball, I’m unstoppable. I don’t think anyone honestly can guard me 1-on-1. I feel like every time I touched the ball, any shot I shot tonight, I feel like that every single night against anybody," Towns said.

The regular season is now winding down, with only 12 games remaining before the playoffs. Currently in the No. 7 spot in the Western Conference, every game will count from here on out for Minnesota if they want to secure a spot in the playoffs, or even the play-in competition.

The Los Angeles Lakers will be the Timberwolves next opponent on Wednesday at Target Center. In the No. 9 spot in the West, the Lakers are on the verge of missing the playoffs for the first time in years.